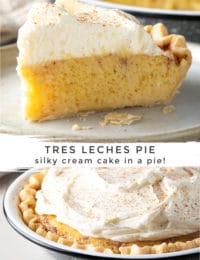 I’ve always been a sucker for a silky slice of Tres Leches Cake.

It’s a light airy sponge cake, saturated with three milks, to the point of weeping sweet creamy tears when sliced and set on a plate.

Mexican Tres Leches Cake is a unique and satisfying dessert, that is a true crowd-pleaser. Especially when piled high with fresh whipped cream!

So why couldn’t I just leave Tres Leches Cake alone? Why did I have to go and turn it into a pie?

Second, as much as I love traditional Tres Leches Cake, I thought the soft textures could benefit from a bit of flaky crust for contrast.

Imagine it… Heavily saturated custard-like cream cake, with a dash of cinnamon, resting in a crisp buttery crust, then topped with a mountain of whipped cream.

It screams Thanksgiving and/or Christmas!

There are four components that make a Tres Leches Pie work. Let’s discuss…

You can use a store-bought refrigerated pie crust in this recipe, or you can make pie crust from scratch. Either way, you must freeze the pie crust in the pie pan before placing it in the oven. This will help to keep the sides erect while baking.

Then you must bake the pie on the bottom rack so the bottom crust is well baked and can withstand the moisture from the filling.

In order for the three milks to have a platform in which to shine, there must something to hold them in place. A simple sponge cake, baked directly into the crust will to the trick!

It’s best if the sponge cake isn’t overly flavored, so the delicate milky taste can be the star.

A little pinch of cinnamon offsets the dairy and brings the flavors together.

The final element of a great Tres Leches Pie, and also the traditional cake, is a generous dollop of whipped cream on top.

Whipped cream is one of the simplest things to make.

Just beat cold heavy cream with a little bit of sugar, on high speed. Within a couple of minutes, you have real whipped cream.

How To Make Tres Leches Pie

Get the Full (Printable) Tres Leches Pie Recipe Below 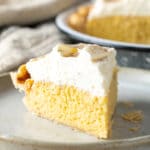 For the Tres Leches:

For the Whipped Cream:

As with traditional tres leches cake, this pie is best when eaten on the first or second day.