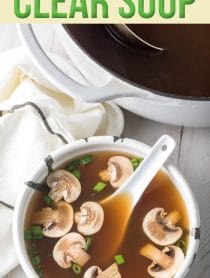 Japanese Clear Soup Recipe: This classic Hibachi restaurant favorite is a light and healthy soup to soothe the soul.

No, not Miso Soup. The one they serve at Hibachi restaurants before the chef comes out. What’s it called?

I’m sharing this recipe today because I’ve had this exact same conversation multiple times in the last couple of years. First, a friend wants to know what “that soup” is called. Then they ask for a recipe.

On most Hibachi restaurant menus in the United States, this illusive soup is called Clear Soup.

However, it is also known as Miyabi Soup, Japanese Onion Soup, and even Hibachi Soup.

What Is Japanese Clear Soup?

This simple broth-based soup is primarily made of meat broths and vegetables simmered together over a long period of time to create a deep rich flavor.

The vegetables are then removed so the soup is clear, and garnishes like scallions and thinly sliced mushrooms are added to the top.

However, Japanese Clear Soup can vary in color, clarity, and even ingredients.

For instance, if you use all chicken broth your clear soup will have a lighter flavor and clearer appearance. Yet it will lack in-depth compared to versions that contain some beef broth.

Whereas, if you use beef broth, depending on the brand you buy, your clear soup may not seem very light and clear at all.

Some versions even skip the chicken and beef broth altogether and use mushroom broth.

We feel the very best homemade Japanese Onion Soup is made with 2 parts chicken broth, 1 part beef broth, and extra water to allow for evaporation.

Although the color is a bit darker than some restaurant clear soups, it can be made in about an hour and has an intense meaty flavor.

It should be mentioned that most restaurants make soups like this several days in advance so the ingredients have a longer time to mix and mingle. That’s why they taste richer than homemade versions.

However, you too can make your soup several days in advance and it will taste just like it does at your favorite Hibachi restaurant.

Get the Full (Printable) Japanese Mayabi Clear Soup Recipe Below!

This light lean soup is so robust and flavorful, you’ll want to make it again and again.

It might even give you the confidence to take on the onion volcano! 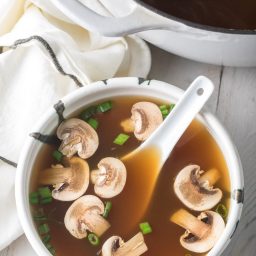 In restaurants, this soup is made several days in advance to allow the flavors to deepen. It’s not only a great leftover; it actually tastes better on the second day. If you have time, make it ahead, then rewarm the soup before adding the scallions and mushrooms. *You can also add soy sauce to taste to deepen the flavor.