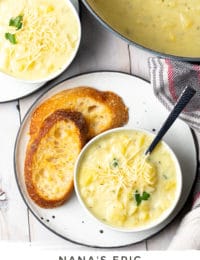 Nana’s Creamy Potato Soup Recipe – Our Cream of Potato Soup packed with garlic, rosemary, sour cream and parmesan cheese is easy to make, ultra creamy, and so inviting. Give it a try!

My mom, AKA Nana, is a great cook by all general standards. She instinctually knows how to do the little things that make the biggest impact in flavor and texture.

However, she is decidedly a goddess when it comes to the foods she made us most often growing up.

According to our family, our neighbors, and anyone who has ever tasted her signature dishes, Nana’s recipes are always the best, hands down.

The dinners Nana perfected over the years are inexpensive to make, yet feed a crowd, and most importantly are comforting and delicious.

Nana regularly fed our family of seven (plus a handful of stragglers) on:

Therefore, it only makes sense that I finish sharing mom’s most-made best-loved recipes with the dish I think I most associate with her.

Nana started cooking at an early age, and is now in her eighties. That means, she’s been making her Creamy Potato Soup Recipe for over 70 years.

Through decades of tweaking, she has turned this humble potato soup recipe into a masterpiece.

Nana’s EPIC Creamy Potato Soup has it all…

Of course, Nana doesn’t have an actual recipe. She just makes her potato soup from memory.

Yet after years of watching her, asking questions, and practicing her method, I finally have a “best” potato soup recipe to share with you.

What Do You Add To Potato Soup For Flavor?

Although Potato soup is simple in flavor and concept, there are ways (as Nana has keenly discovered) to make it better than average.

Nana’s version is rich and zesty. It offers complexity, even though the main ingredients are just potatoes, onions, and celery.

What Are Nana’s Potato Soup Secrets?

Although some people like to make potato soup with new potatoes (waxy potatoes) Nana says you get the best texture from starchy potatoes like russets or Yukon Gold.

Starchy potatoes break down as they cook, thickening the soup base, whereas waxy potatoes hold their shape and leave the broth watery.

Chicken Base or Bouillon

Instead of adding just water or broth to the potato soup. Nana says adding chicken base paste or chicken bouillon to the soup gives it an intensified flavor.

It should be stated, you do not have to add herbs to potato soup… But it’s a mistake to leave them out!

Because potatoes have such a mild flavor, herbs act as a springboard to boost the overall flavor of the soup.

You can add any herb you like to potato soup. However, we love the simple combination of garlic and rosemary.

Many potato soup recipes call for milk or heavy cream to be added at the end. Some vegan versions even include coconut milk.

Yet Nana says a combination of sour cream and parmesan cheese provides the perfect level of richness, silkiness, and balance of flavors.

You get a sharp salty note from the parmesan and a delicate creamy twang from the sour cream. Together, they provide a brilliant undertone to this hearty soup.

Most of the ingredients needed are kitchen staples you may already have in your refrigerator or pantry. Creating the best flavor is all about using the right amount of each ingredient!

How To Make Potato Soup From Scratch

Nana’s best potato soup is so appealing, you won’t believe how easy it is to make.

Get the Full (Printable) Creamy Potato Soup Recipe Below!

Why yes! You can make this recipe in a crock pot.

Be sure to sauté the aromatics on the stovetop to soften and sweeten. This step cannot be replicated in a slow cooker.

Then add the potatoes, water, bouillon, and rosemary to the crock.

Then mash a little, and stir in the dairy.

What Potatoes Are Best For Potato Soup?

Starchy potatoes, like Russets and Yukon Gold, are best for potato soup because the break down as they cook and make the soup base thick.

Waxy potatoes, like new potatoes, hold their shape too well to thicken the broth.

How Do You Make Potato Soup Thicker?

If you use starchy potatoes, Potato Soup thickens on its own as it cooks. The best way to thicken Potato Soup, even more, is to mash some of the potatoes and stir in some sour cream.

You do not need to add flour or cornstarch for thickening.

This version is! Double-check the chicken base or bouillon you buy to be sure… Most brands are gluten-free, but its best to check.

How Long Does Potato Soup Last?

Potato Soup leftovers will last in the refrigerator for up to one week. Store in an air-tight container and keep in the back of the fridge.

That makes this a fabulous Meal Prep Recipe!

Can You Freeze Potato Soup?

Yes! Store the soup in an air-tight container and freeze for up to 3 months.

When ready to use, thaw completely before reheating on the stovetop.

More Soup With Potato Recipes You Will Love 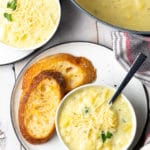 Prep Time: 20 minutes
Cook Time: 40 minutes
Total Time: 1 hour
How to Make the BEST Potato Soup Recipe you've ever tasted! Our Soup with Potatoes, garlic, rosemary, sour cream, and parmesan cheese is easy to make, ultra-creamy, and so inviting. Give it a try!
Servings: 12 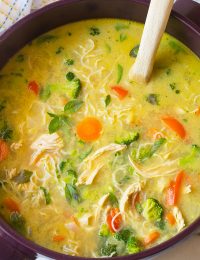 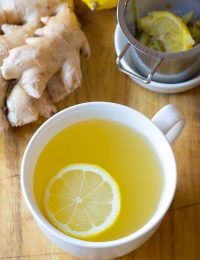 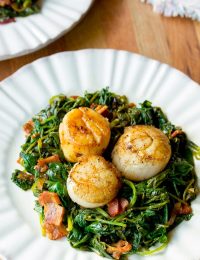 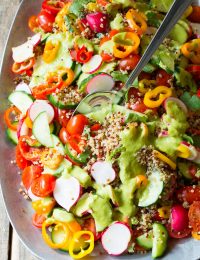