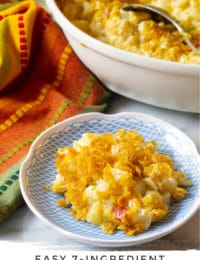 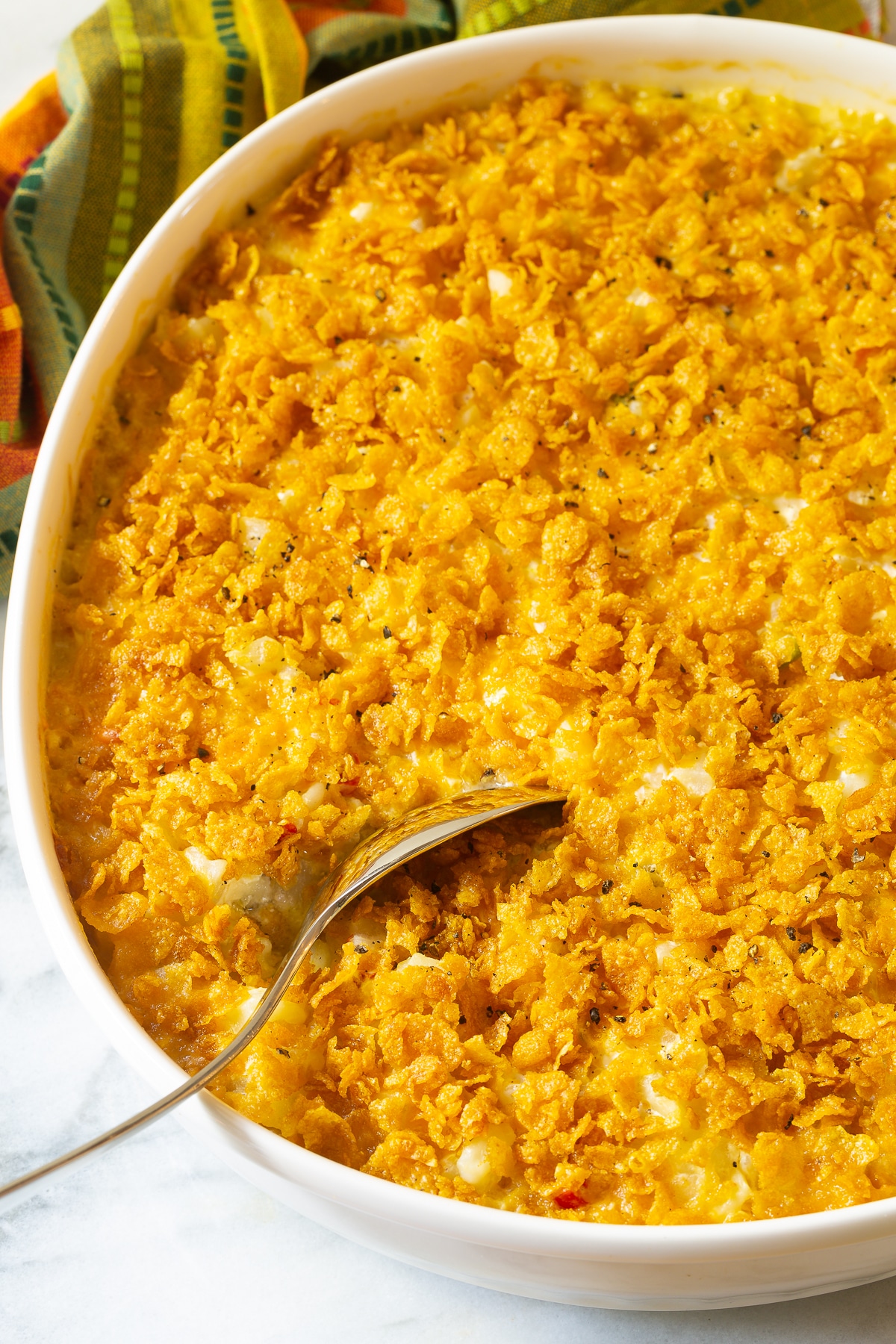 With all the new recipes we create and test each month, you’d think we never have time for repeats. However today’s 7-Ingredient Funeral Potatoes Recipe is a dish I’ve been making for over 20 years!

This is a recipe I must credit to my mother-in-law Sue. When Lt. Dan and I were first married he would sometimes slip and tell me no one was a better cook than his mother.

Although my mom had taught me quite a few tricks in the kitchen, her cooking style was quite different than Sue’s cooking style. So there were dishes Dan wouldn’t touch because his mom never made them.

I decided if my new husband was ever going to believe I could cook as well as his mom, I was going to have to learn to make some of her recipes.

Today’s Funeral Potato Casserole, AKA Company Potatoes, is a recipe I learned to make years ago, and is just as appealing today!

Each time we visited Dan’s family, I would take notes on Sue’s recipes and write them down in a little kitchen journal.

I started making her top chicken recipes, her lasagna, and this simple potato bake she called Company Potatoes.

Just because this dish is made with less than chic ingredients doesn’t mean it is low quality. 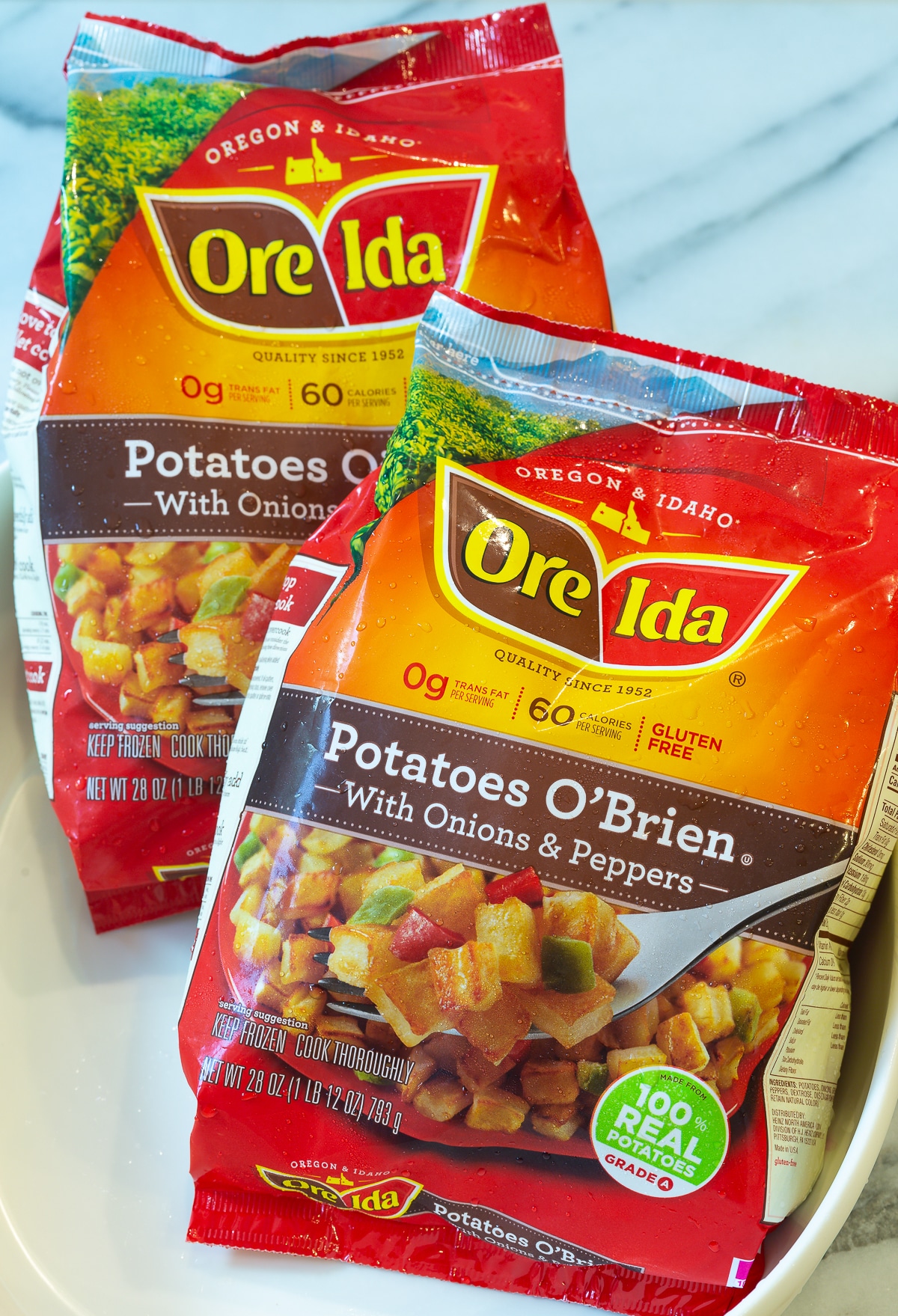 Each of these recipes involves frozen hash brown potaotes, butter, cheese, and other ingredients to make a creamy base. Most have a crunchy top made out of corn flake cereal!

Some recipes include cream of  chicken canned soup, as the base. However, I always prefer to skip canned soups (just a personal preferrence) and use fresh ingredients instead!

The most popular name “Funeral Potatoes” refers to the fact that this reicpe is commonly served at after-funeral gatherings, as well as being a easy freezer dish one would bring to a family who had just lost a loved one. 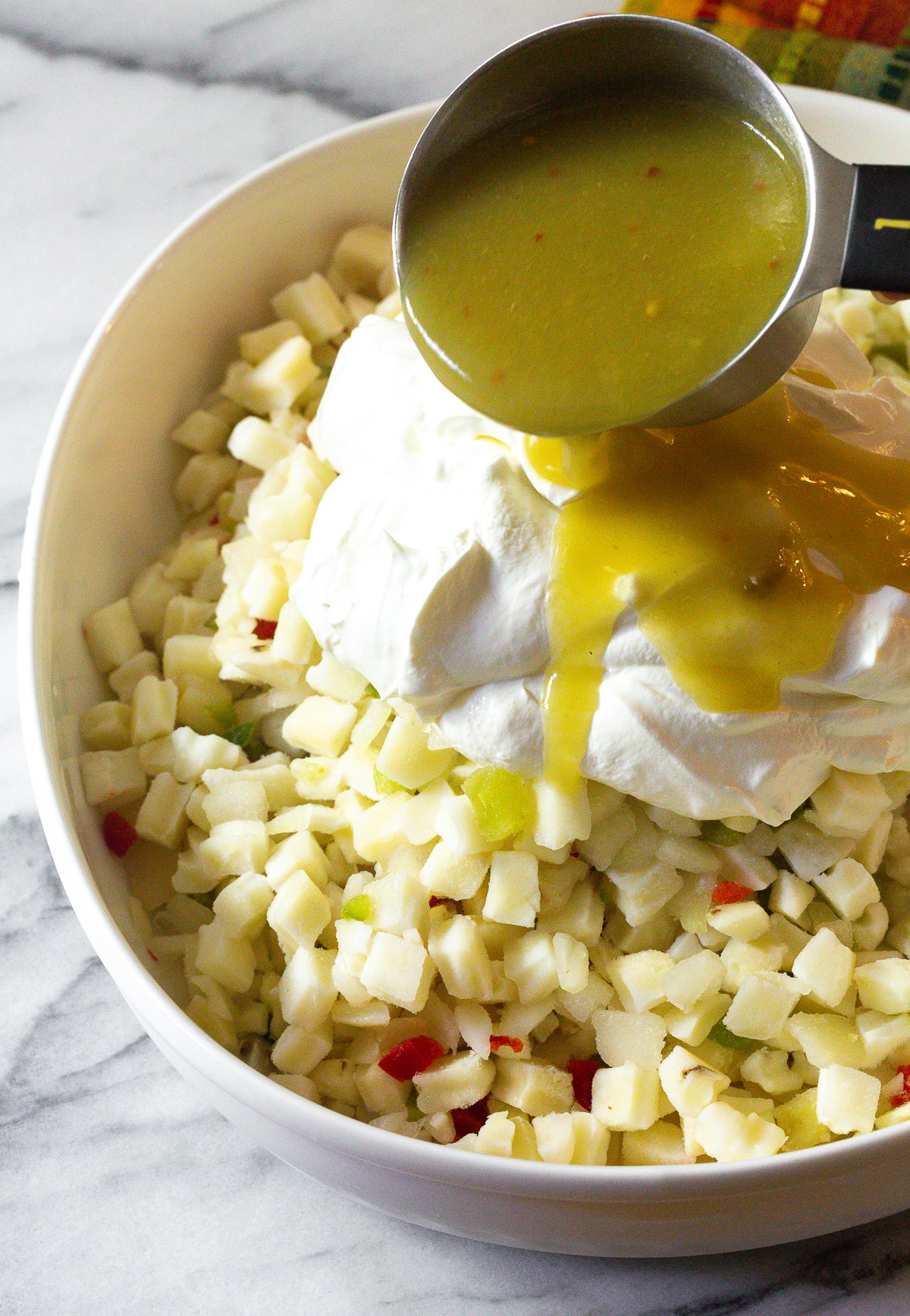 Easy Funeral Potato Casserole Made In ONE Dish!

Sue’s “Company Potatoes” side dish has morphed over the years in our house. I’ve started substituting salsa verde (or green enchilada sauce) and sour cream for the cream of chicken soup… To kick it up a notch.

Sour cream, salsa verde, shredded cheese, and chicken base are mixed to create the creamy base.

They can be mixed in the baking dish with the hash brown for easy clean up.

Then corn flakes are crumbled and mixed with butter to sprinkle over the surface, creating the icon golden crunchy top. 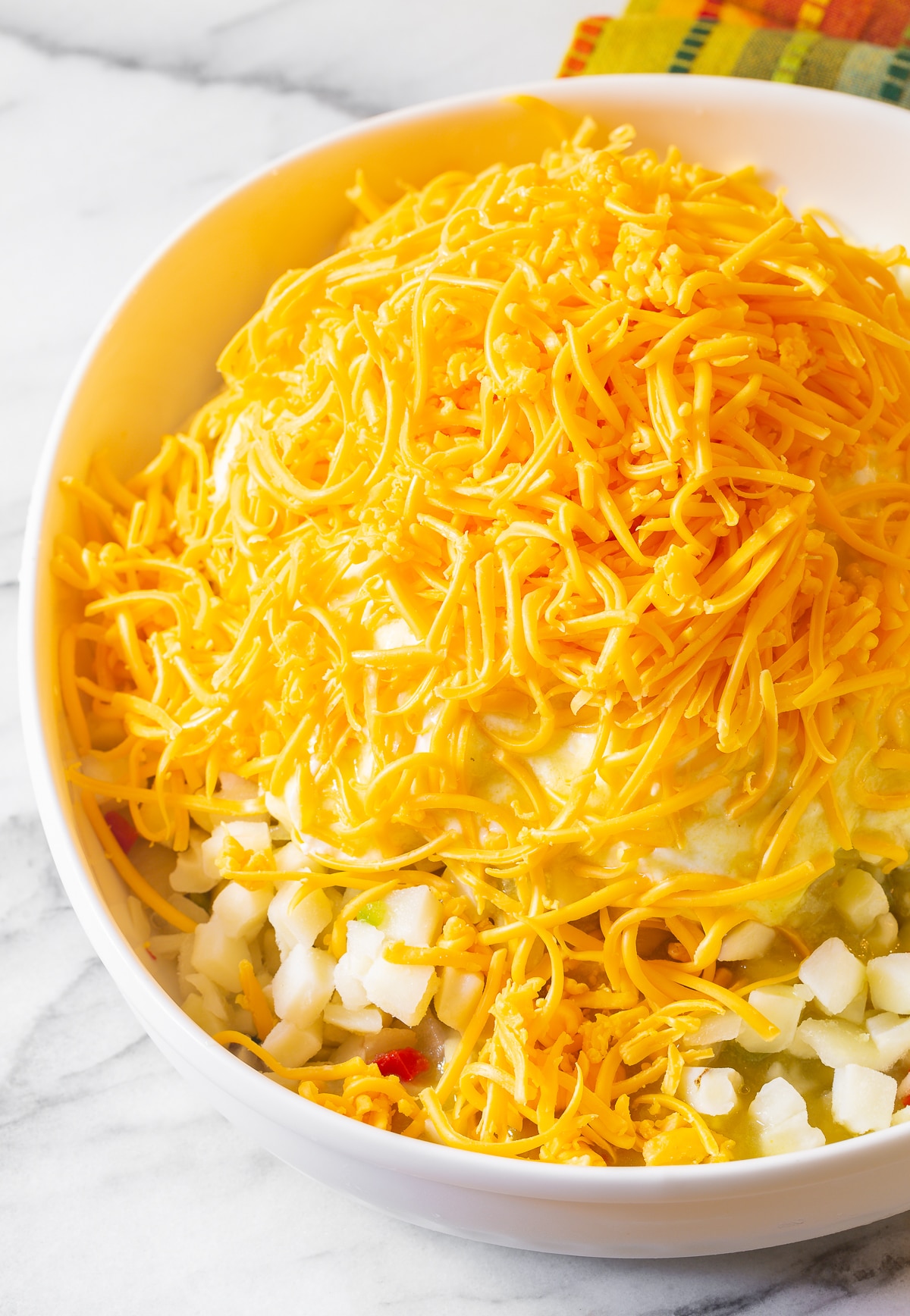 Our 7-Ingredient Company Potatoes Recipe makes a large deep pan of zesty, creamy, cheesy potatoes that can feed many people, and is a wonderful side dish for holiday turkeys and hams.

Give it a try! 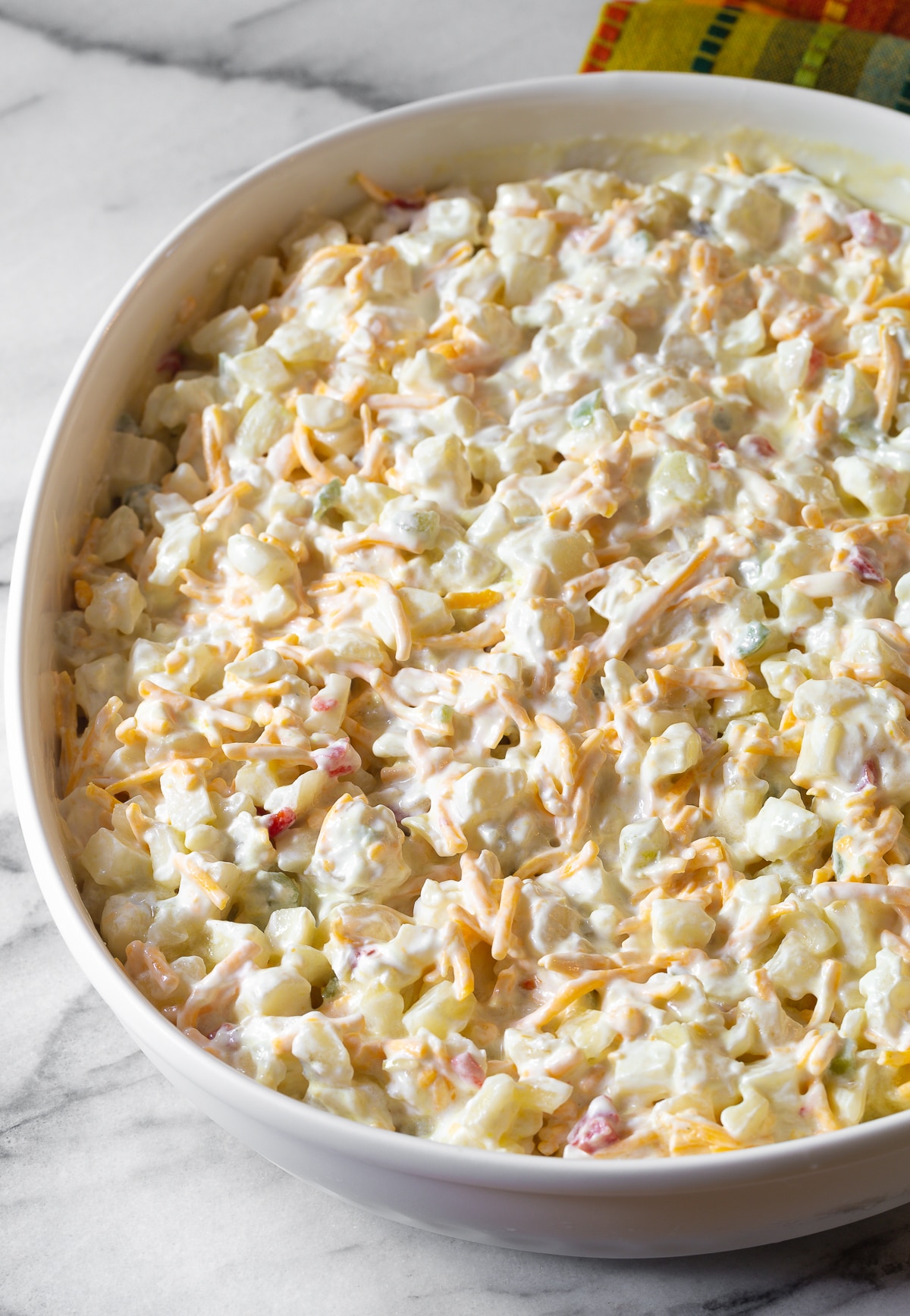 That’s right, you only need seven items to make this rich comforting dish… And several of them are pantry staples.

How To Make Hash Brown Casserole

Get the Full Easy Funeral Potatoes Recipe Below! 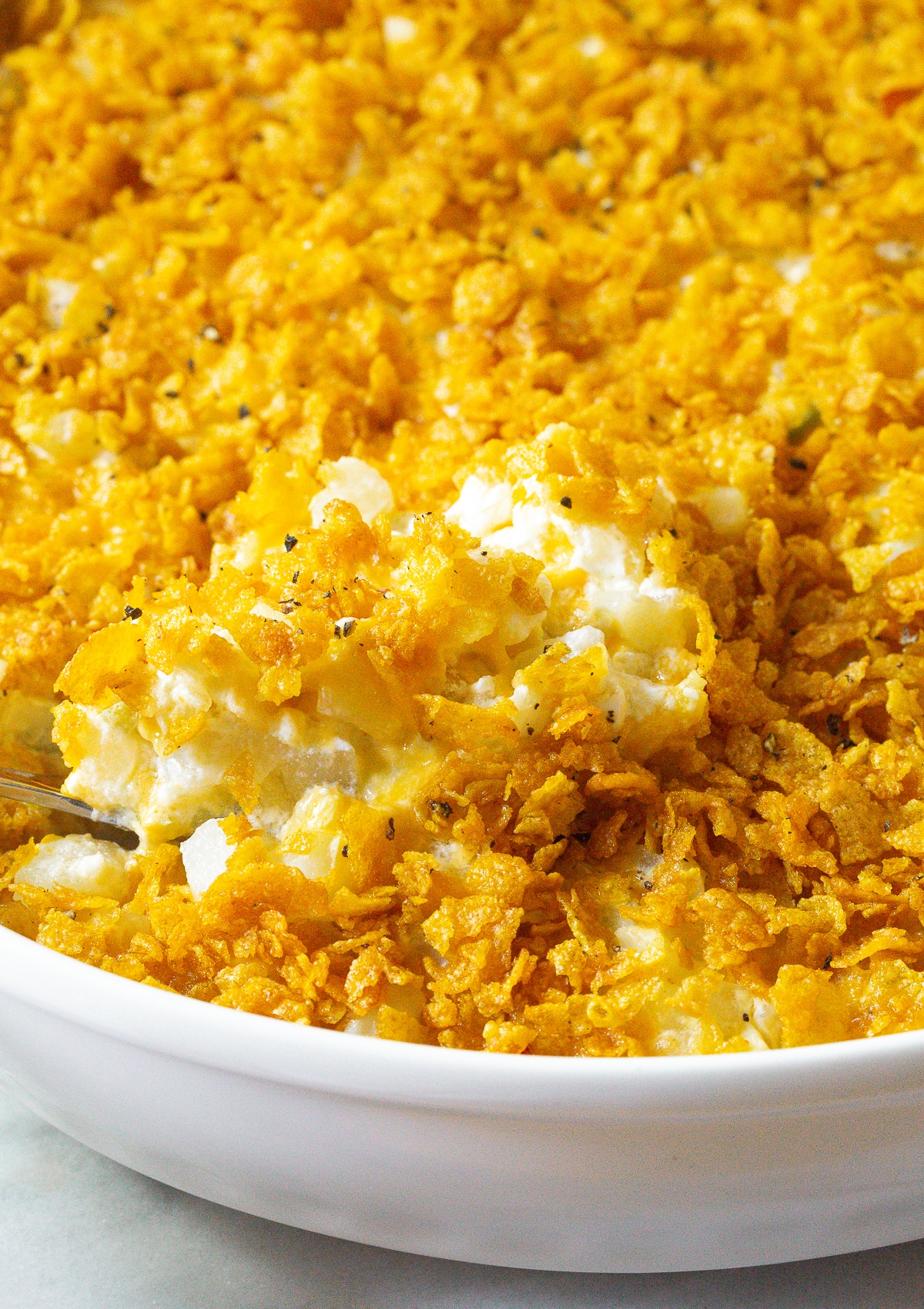 Can I Sprinkle Something Else (Other Than Corn Flakes) Over The Top Of The Potatoes?

Don’t love the idea of corn flakes? Try topping the potatoes with:

Some versions are not, but THIS recipe is!

As long as you buy a brand of corn flake cereal labeled Gluten-Free you are in the clear.

Absolutely! The term “Funeral Potatoes” comes from the fact that this dish was traditionally made to take to families who had just suffered a loss, or have sick family members.

It’s a fabulous dish to make in foil pans, wrap well, and freeze for later use, or to take to friends.

Freeze for up to 3 months. Take the pan out of the freezer the night before baking and thaw in the refrigerator. Then bake for 1 hour and 15 minutes.

Can I Make Company Potatoes Ahead Without Freezing?

Sure thing! You can make this recipe up to 3 days in advance, before baking. Do not add the crunchy topping until you are ready to bake. 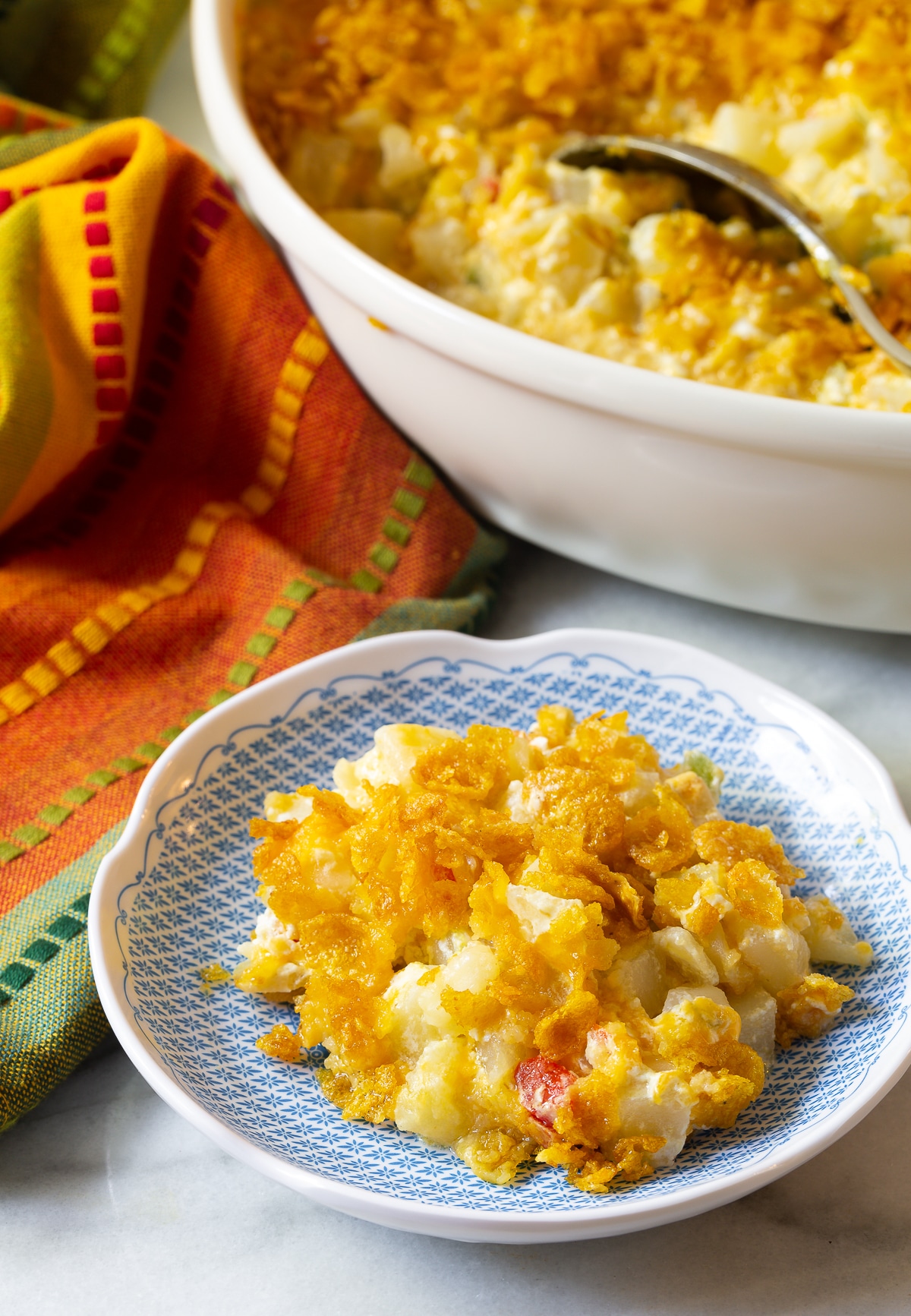 What Goes With Funeral Potatoes? 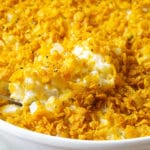