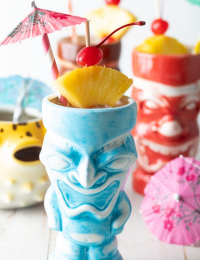 The Best Mai Tai Cocktail Recipe – A bright and boozy Hawaiian drink fit for the gods. If you are planning a summer gathering, our Best Mai Tai is just the party punch to get the good times rolling.

There are a lot of fruity cocktails out there masquerading as Hawaiian Mai Tai’s.

They can be served as a light and lively party beverage in tiki mugs, or as sophisticated cocktails in lowball glasses. Drinking one of these perky beverages can transport you to your most favorite tropical setting, to mentally relax and unwind.

There is also a fun Mexican version of this recipe with slightly different ingredients. It is very similar, made with tequila, so it adds a Mexican flair to the cocktail.

How To Make A Mai Tai

The Original Mai Tai Recipe is so easy to make, it’s just a matter of combining, shaking, and pouring. It is as simple as that!

FUN FACT: Why are most modern Hawaiian cocktails served in tiki mugs? Because the majority of traditional tropical drinks were made with dark liquor and fruit juice. So they were brown and murky in color, not bright pink and blue like today’s beachy cocktails. Therefore, tiki mugs with large bold garnishes were introduced to make them visually appealing.

Looking for a twist on the Classic Mai Tai Cocktail? This Mexican Mai Tai Recipe is a little less sweet than the original… And incorporates tequila.

It’s citrusy, bright, and refreshing. A great way to kick off the weekend!

What is a Mai Tai?

This cocktail is similar to a Daiquiri due to its tropical origin and taste. However, Daiquiris are made with rum, citrus, simple syrup, and additional fruit. Whereas, Mai Tai’s incorporates orange liqueur and orgeat, an almond-flavored syrup.

Why is it called a Mai Tai?

As the story goes, in the 1930’s a man named Victor Bergeron had some friends visit him from Tahiti. He loved to cook and make cocktails to impress his guests. So one day he decided to make a new beverage for his friends to try. They loved it so much they exclaimed, “Mai tai-roa aé!” In Tahitian, this means “out of this world, the best!” Since his friends loved it so much, he decided to name his new cocktail a Mai Tai which then means that this drink is out of this world.

A traditional Mai Tai is a very boozy and citrus-forward drink that originally was very tart. Yet often tiki bars and lounges tend to make them overly sweet. You can add more or less simple syrup to adjust it to your taste preferences. However, in this original recipe, the lime and rum flavors are the most dominant. To soften the lime, orgeat and Cointreau are added to create body and depth into the cocktail.

Can I Make Mai Tai’s Ahead Of Time?

Absolutely. Simply mix the ingredients, reserving the ice for later, and place in an airtight container in the refrigerator. When ready to serve, pour the Mai Tai mix in a shaker over ice and shake until frothy. You can make Mai Tai’s up to 2 weeks in advance, making this a great cocktail to keep on hand all summer long.