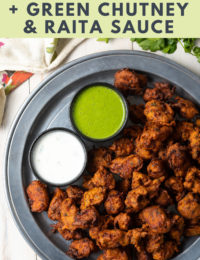 India a diverse country with a wide array of culinary traditions. Each region has it’s own distinct cooking style, along with a collection of recipes… Many of which are found nowhere else in the world.

Some of the most unique recipes in India are made on the streets. From puffed grain salads to savory bubbly pastries, you can find all sorts of exciting foods to try along the busy roads and in open-air markets.

Pakora is a snack food found all over India, as well as in other parts of Asia. When most westerners see Chicken Pakora for the first time, they immediately think of fried chicken nuggets.

Chicken Pakora is very popular indeed, and does resemble chicken nuggets, because it consists of chicken pieces dunked in breading and then deep-fried.

However, a good Chicken Pakora Recipe offers a dynamic flavor laced with spices, and is most often served with Green Chutney and/or Raita yogurt sauce for dipping.

It should also be stated that Pakora does not always include chicken. In fact, most Pakora found on the streets of India is made with vegetables, so it is more like fried vegetable fritters (or veggie tempura) than nuggets.

Although there are many intricate Pakora recipes online, that include hard-to-find ingredients, at least here in the United States, today I’m sharing my simplified home-cook version.

Let me be clear… There are still quite a few ingredients in this recipe, and it does involve deep frying and making two sauces. I do not want to mislead you.

However, this process is still much easier than traditional Indian Pakora Recipes, without sacrificing flavor or texture.

Also, most of the ingredients (like the spices) are pantry staples that you probably have on hand, if you cook on a regular basis.

I think you will find our Easy Indian Chicken Pakora with Green Chutney and Raita is fun and satisfying to make, and even better to eat!

The chicken pieces are ultra-crispy on the outside, tender on the inside, and bursting with exotic flavor.

The two sauces offer both the option to brighten the Pakora with spicy-herb Green Chutney, and cool it down with Raita yogurt sauce.

Who Should Make This Chicken Pakora Recipe?

If you have eaten Chicken Pakora at your favorite Indian restaurant, and never thought it would be possible to make it at home…

If you are eager to try something new in the kitchen, that everyone will go crazy over…

This is the recipe for you!

As mentioned, you will probably have most of the spices in your pantry. And most of the other ingredients are easily found at the grocery store.

The only items that could potentially be considered hard-to-find are:

All three of these ingredients can be found online. (Links in the recipe below.) However, if you have a grocery chain in your town with a good international section, you should be able to find them.

Kashmiri Chile is added to color and spice the batter. If you cannot find it, you can use a mixture of paprika and cayenne pepper.

Garam Masala is a common Indian spice blend, that should be in the spice aisle at your local market. However, you can also make your own Garam Masala at home!

Chickpea Flour (or Garbanzo Bean Flour) would most likely be found with the other wheat flour alternatives in the baking section. Also, look for Gram Flour or Besan Flour. They are all made from a similar type of legume.

Why yes, this recipe IS Gluten Free!

Because we are using only Chickpea Flour, these chicken nuggets are completely safe for those with a gluten intolerance.

Any type of fried chicken always tastes best when eaten fresh. However, this Chicken Pakora holds up remarkably well in the refrigerator for a couple of days. Rewarm it in the oven to re-crisp the breading.

You can freeze the leftovers after cooking. Place them in an airtight container and freeze for up to 3 months.

When ready to serve. Thaw the Chicken Pakora and then reheat in a 350 degree oven for 8-12 minutes.

You do not have to make these dipping sauces to enjoy the Chicken Pakora Recipe.

However, they are very easy to whip up in the blender and add a LOT to the overall experience and flavor.

If you plan to make just one sauce, I would personally go with the Green Chutney. The vibrant flavor of pureed cilantro, mint, ginger, and lemon really lift the heavy spice essence of the Pakora breading.

Just be sure to watch the spice levels… My family loves both the Chicken Pakora and the Green Chutney with lots of spicy-heat. Yet you can reduce the heat in one or both of these recipes. 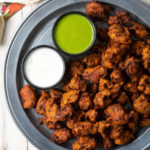 For the Chicken Pakora

For the Raita Sauce

For the Green Chutney

Make Ahead? Chicken Pakora is actually pretty amazing as a leftover. You can make and rewarm in the oven 1-2 days in advance. If you want to make it an hour or two before serving, you can turn the oven on the lowest heat (usually around 175-200) and place the chicken in the oven to keep it warm and crisp.  Gluten-Free! Because chicken pakora is made with chickpea flour, instead of wheat flour, this recipe is completely gluten-free.