This weeks “How To” Tip: How To Roast Red Peppers. Roasting your own peppers is a simple way to enjoy that sweet and smoky flavor you crave! 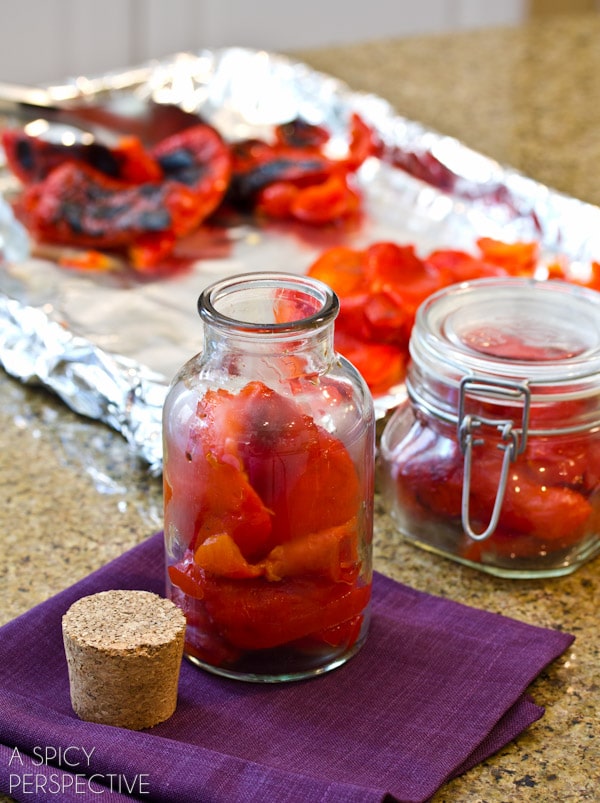 I am crazy for roasted red peppers. CRAZY… for them.

You don’t have to roast your own peppers for any of these recipes. In fact, at certain times of the year, jarred roasted red peppers are much less expensive and make a good substitute.

But as I mentioned in my last How To post, fresh always wins when it comes to flavor. 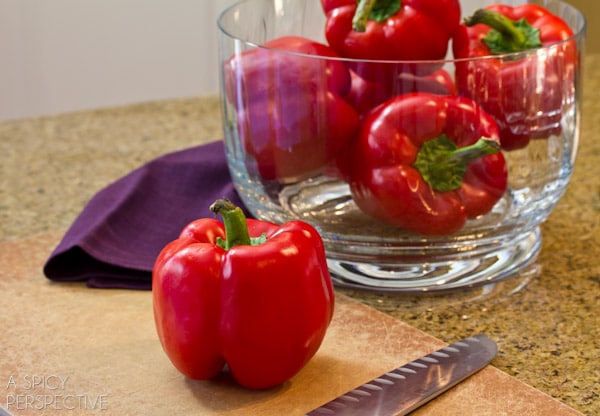 However during pepper season, you can get all sorts of fresh peppers for a fraction of the cost.

Roasting you own red peppers is the best way to get the freshest smoky-sweet pepper flavor.

I’ve roasted red peppers in a variety of ways. If I’m using my grill for other dishes, I just throw whole peppers on the grill and give them a good char. If I only have one red pepper to roast, I’ll hold it over a gas burner with tongs to quickly char all the sides.

Yet the most efficient way to roast a LOT of peppers at once, is oven roasting peppers.

You don’t have to mess with turning the peppers, you simply lay them out flat and leave them in the oven until the skins are dark and blistered.

How to Roast Red Peppers 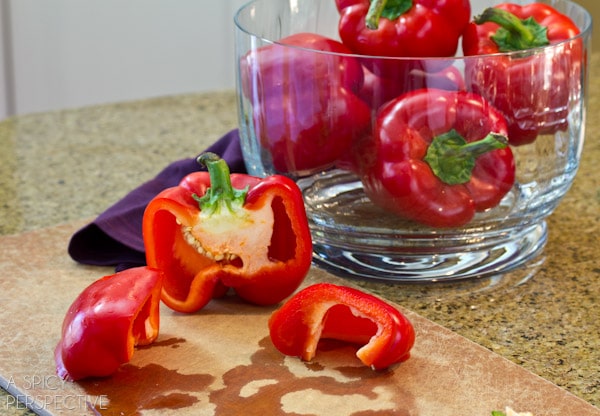 Move the oven rack to the top position and preheat the oven to broil.

Cut all the peppers into quarters, then remove the stems, seeds and membranes. 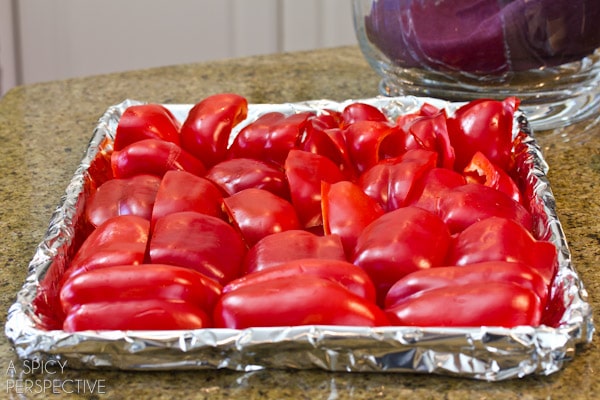 Lay the peppers flat on a foil-lined rimmed baking sheet, skin side up. Press them flat with your hand. You want as much skin as possible to be directly under the heat source, for even charring. This makes the peels easier to remove later. 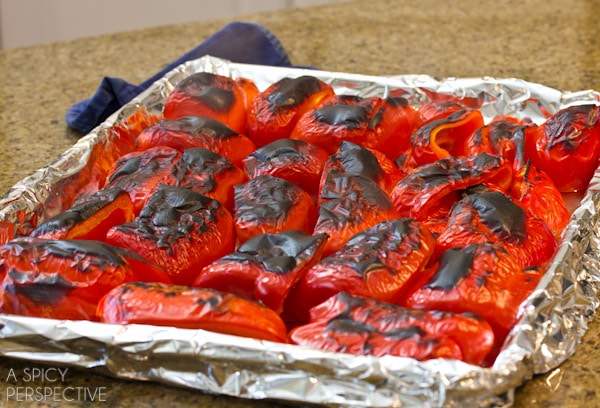 Broil the red peppers 10-15 minutes, or until the skins are extremely black, but the flesh underneath is still soft and moist. 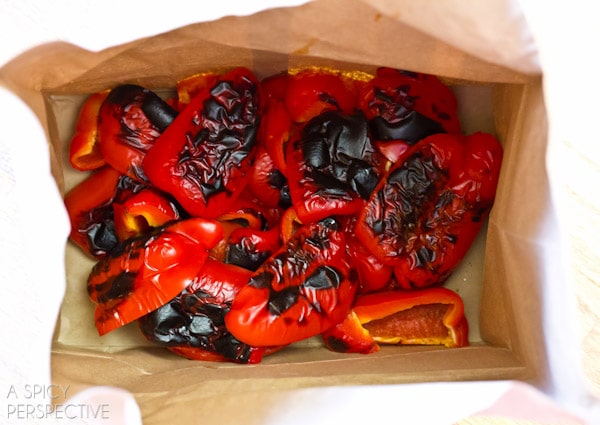 Once the skins have blackened, remove the peppers from the oven and place in a large paper bag, or zip bag. Close the bag and allow the peppers to steam for at least 10 minutes. This loosens the skin from the flesh. 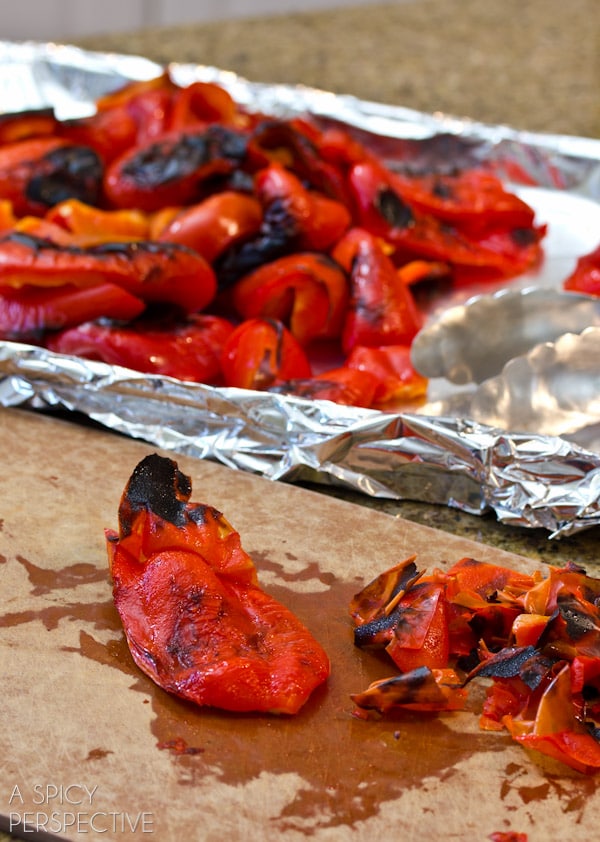 After the peppers have had time to steam, dump them out on the baking sheet and gently pull the skins off. If your peppers were evenly charred, the once rubbery skins should slip right off!

You can now: can, freeze, or refrigerate your oven roasted peppers. If canning, make sure to follow proper canning procedures to get a tight seal on your canning jars. 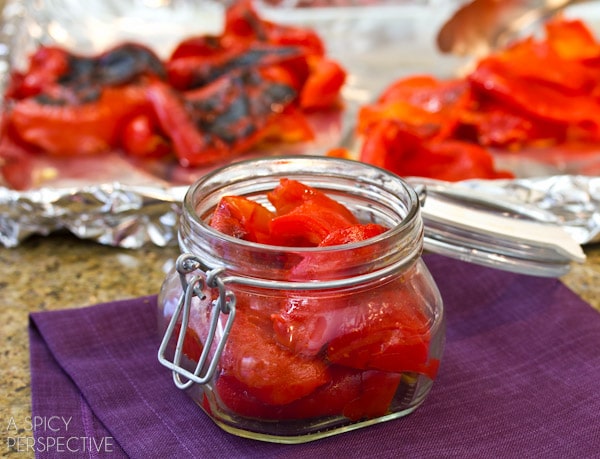 I usually just keep them in an air-tight container, in the fridge for up to a week. Longer if you pack them in oil.

You can roast all sort of peppers this way. Just make sure, if you are roasting thin-fleshed peppers like Anaheims, that you take them out of the oven much earlier. The thicker the pepper, the longer they can stay in the oven. 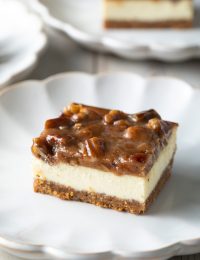