Home » How To » How to Make a Perfect Pie Crust

How to Make a Perfect Pie Crust

Jump to Recipe
5
stars 1 hr
How To

Sigh… Pie Crust. It’s either your best friend or worst enemy. Today I want to show you a few tips on “How to Make Pie Crust” that should make your holiday pies and tarts much more successful. 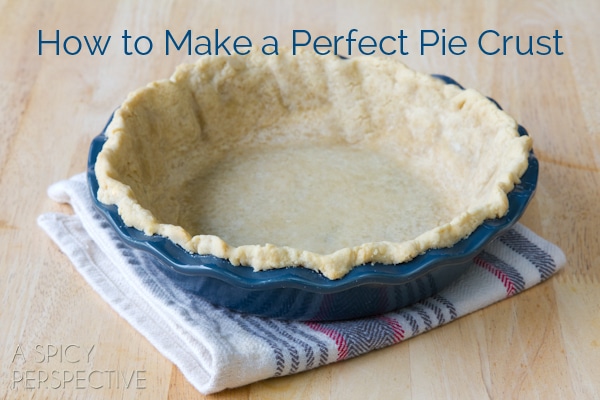 What makes a pie crust memorable?

Most people think of a pie crust as a platform for bigger and better things, but I believe that a good pie crust makes the pie, even more than the filling.

There are several simple keys to making a good pie crust, every time. First and foremost… 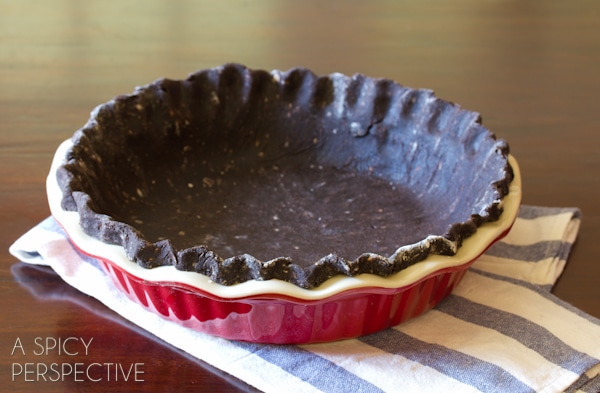 Make sure both your fat and liquid are ice cold. I cut my butter (or shortening) into chunks and place it in the freezer for a few minutes so it’s really cold before blending into the flour. Same with the liquid. Whether I’m using water, milk, or booze I always pour it over ice before measuring it into the mixture to keep it cold.

Why? Cold ingredients ensure the pie crust comes together in itty bitty pieces instead of just mushing together. The little bits of butter layered through the pie crust are what make it flaky as it bakes. (PS… same with other pastry doughs, biscuits and scones.) 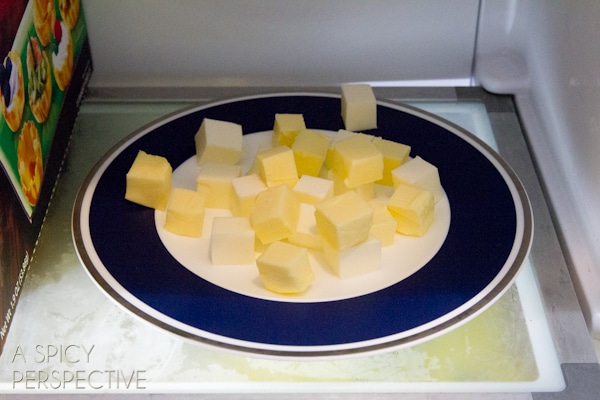 Scoop and level your flour.

Mis-measuring ingredients is one of the most common reasons for baking failures. It’s easy to do when you’re in a hurry, especially with flour. Anytime I measure flour, I stir the flour in the bag to “sift,” scoop it into the measuring cup with a spoon, then level the measuring cup with the handle of the spoon or a knife.

In a perfect world we would all measure flour by weight so this simple baking error would never occur. Yet the scoop-and-level method is a fairly accurate method because the flour doesn’t settle in the measuring cup like it does when you scoop the cup in the bag, packing it down. 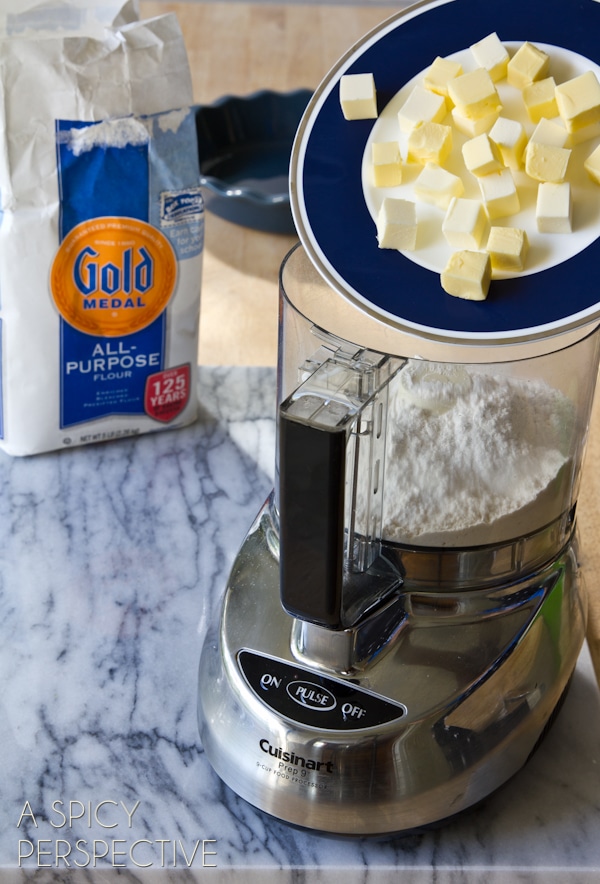 Some people add water or milk to their pie crusts, but I like to use BOOZE!

Adding brandy, bourbon, amaretto, or your favorite booze to pie crusts adds an extra element of flavor to the dough. Plus since it evaporates at a greater rate than water, it bakes away leaving the pie crust extra crisp and flaky. And don’t forget, the less liquid you add to your pie crust the better. You want to add the booze one tablespoon at a time to make sure you’ve used just enough so the pie crust forms a clump, but is not moist. 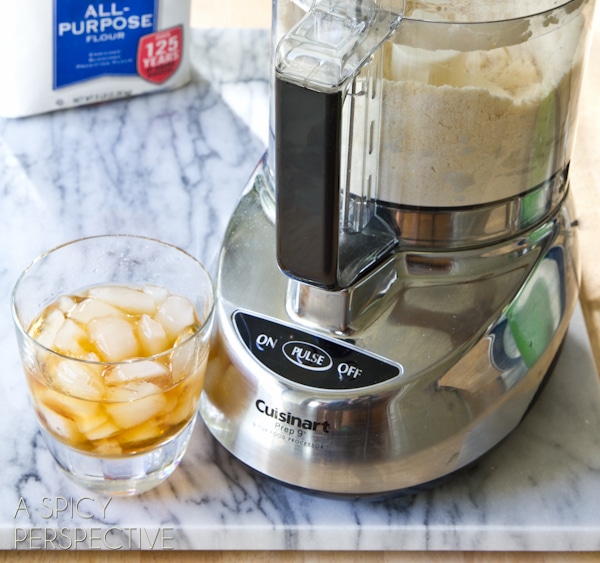 Use a food processor.

If you don’t own a food processor, it might be worth adding to your Christmas list this year! You can make a great pie crust cutting the butter into the dough the old-fashioned way with a pastry dough blender, but the food processor does it so fast and efficiently. The cold ingredients are still cold after you’ve pulsed it a few times, so your results are better. Which leads me to my next point…

Good pie crusts take time. Once your dough forms a clump, dump in out onto a piece of plastic wrap and form into a disk. Wrap it well and place in the fridge for no less than 30 minutes. This will ensure it rolls out firmly, so it doesn’t stick to the pastry board or counter. 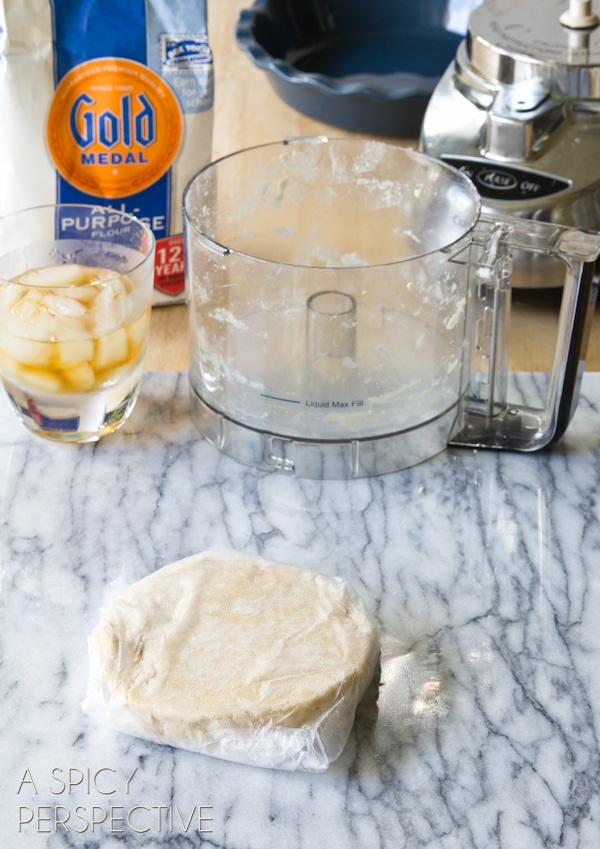 Roll with tons of flour.

Since you were so careful in measuring your flour earlier, now is the time you can go a little crazy! Flour your counter or pastry board well, then flour the rolling pin. Ample amounts of flour keep the dough from sticking to the work surface, which of course is a pie crust disaster. 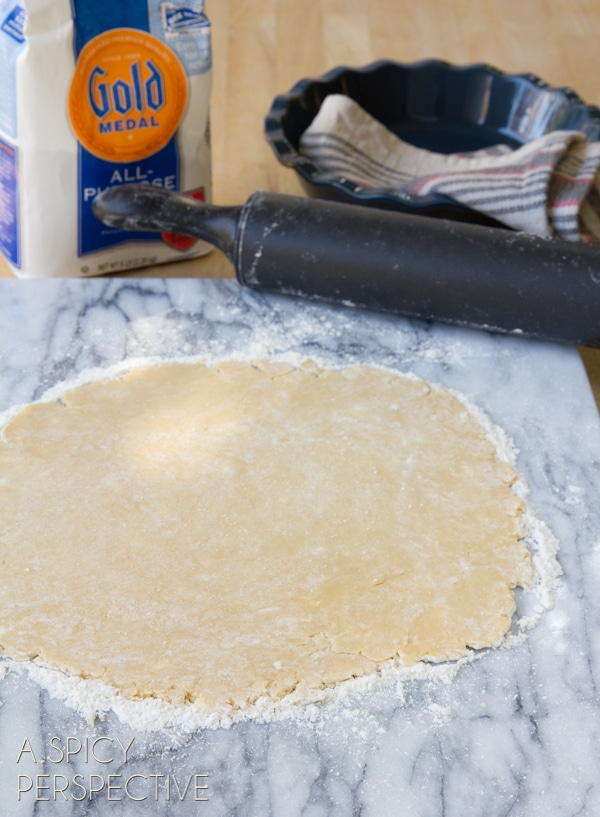 There are two methods I use for moving rolled-out pie dough, the rolling pin method and the wax paper method. I use the first method for standard crusts. You simply roll the end of the pie crust over the pin, then quickly move it to the pie pan and unroll.

The wax paper method is something I do when I’ve swapped out some the the flour for cocoa powder, ground nuts, or cornmeal, because the dough doesn’t have the same stability from the extra gluten.

In this case, I roll the dough out on a piece of floured wax paper, then quickly move and flip the whole pie crust over into the pie pan. Once the crust is in place, I peel off the wax paper. 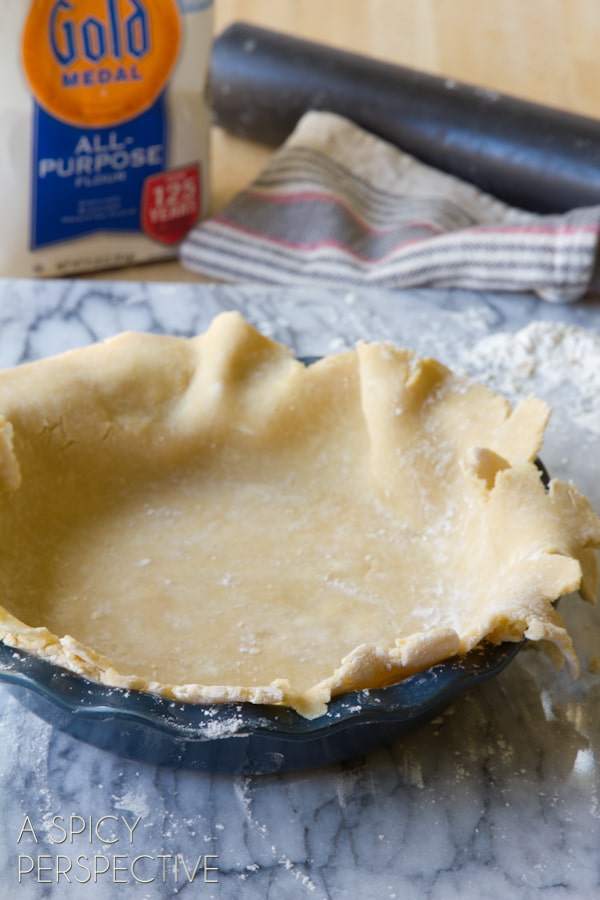 Dough is not meant to be stretchy. In fact, it will pop back out of the shape you stretched when you’re not looking. So always “fit” the dough into the pie pan to the corners, don’t try to stretch it or poke it into place.

Now you’ve got a beautiful COLD pie crust in the pie pan, but the edges are rough…

For tarts, simply fold the excess dough over the metal edge and press to cut it off. 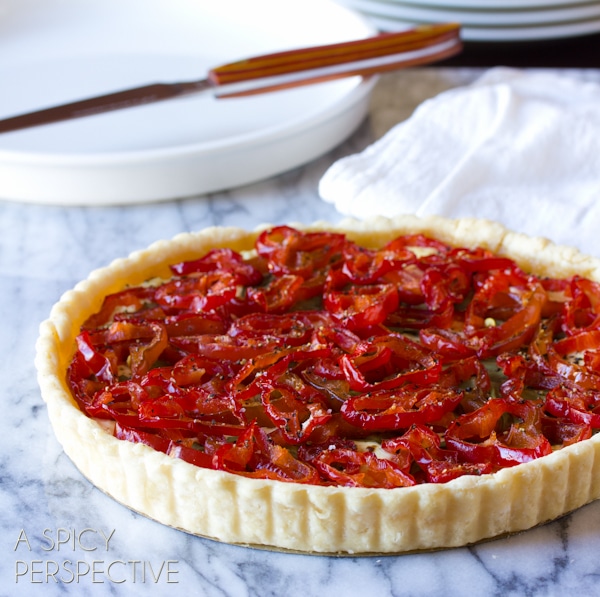 For pies, gently fold the edges under and use your pointer finger on one hand and your thumb and index finger on the other hand to pinch the edge into a wavy top. Don’t worry too much about perfection here. Pies are generally considered rustic, and the dough going into the oven COLD is much more important than a pristinely crimped edge, in my opinion.

If you are a perfectionist, God love you, then crimp until your heart’s content, and put your pie crust back in the fridge for another 20 minutes to be sure it is very cold before going in the hot oven. 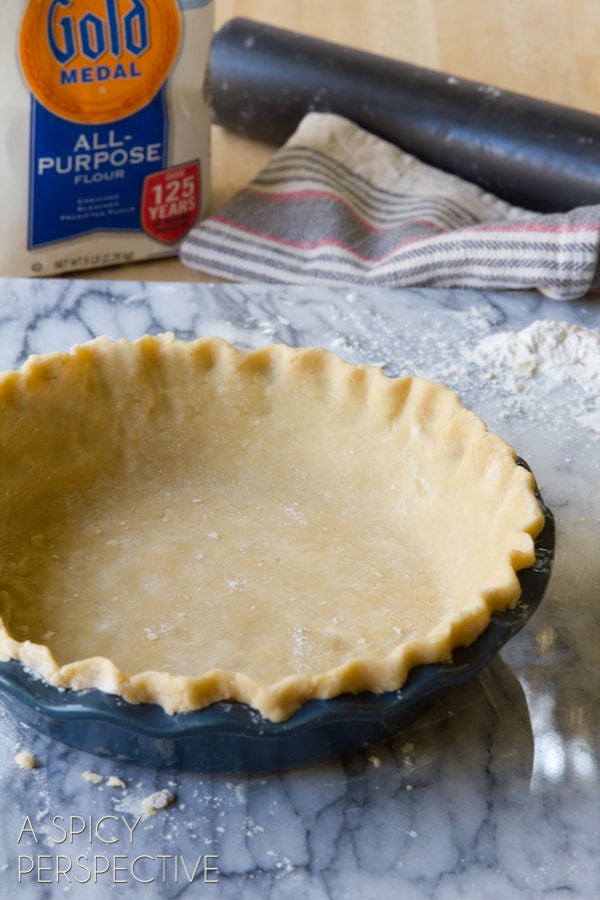 Bake on the bottom rack.

Ever move your oven racks around? I move mine all the time!

Baking your pie crust on the bottom rack position means the bottom of the pie is closer to the heat source so it’s more likely to bake until crisp. Otherwise you may end up with a perfectly golden-brown rim and a raw doughy bottom.

Do this when baking both filled pies or empty pie crusts. 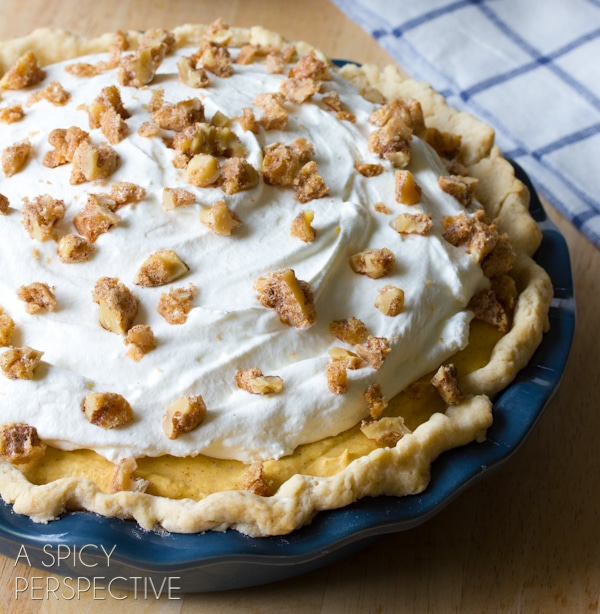 So you want to make a cream pie with pre-baked pie crust. Don’t forget the pie weights! Without something heavy pushing against the bottom and sides of the pie crust, it will slouch, bubble, and lose its shape in the oven. 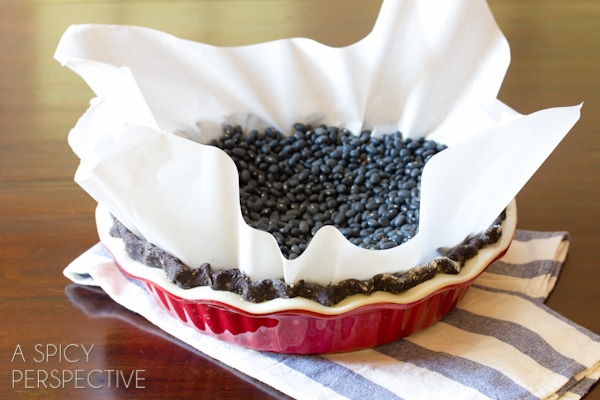 You can actually buy ceramic pie weights shaped like little balls, or do what I do and keep a bag of dried beans or rice around for just this purpose.

Fit a piece of foil or parchment paper into the prepared pie crust, then fill it with “weights” and bake 15-20 depending on the recipe. Once the pie crust has cooled a little, lift the weights out and store for next time. Cool the pie crust completely before filling. 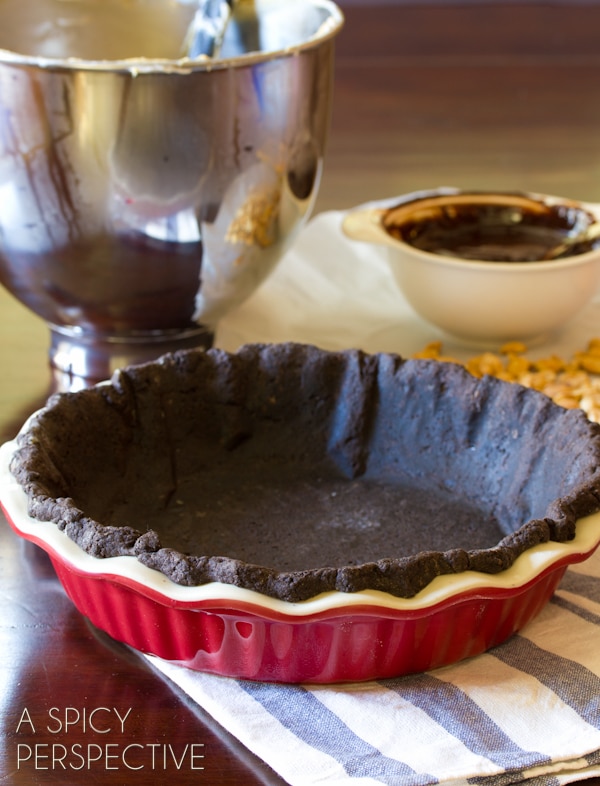 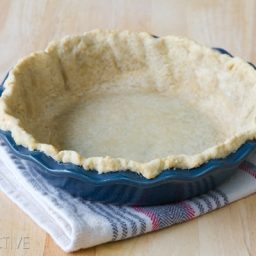 If baking with pie weights:

Check out some of my other favorite Pies and Pie Crust Recipes:

39 comments on “How to Make a Perfect Pie Crust” 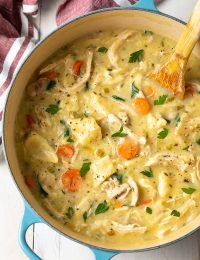 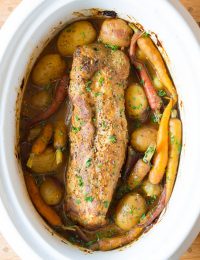 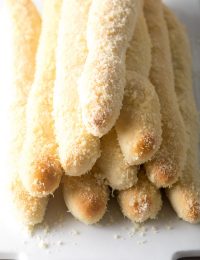 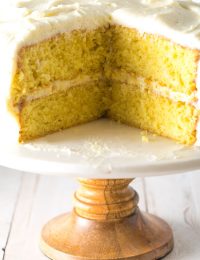