Home » Travel » Best Things To Do In Dubrovnik, Croatia

Best Things To Do In Dubrovnik, Croatia 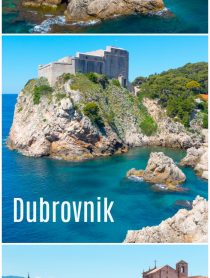 Check out the Best Things To Do In Dubrovnik, Croatia! Top points of interest, attractions, and restaurants in Croatia’s most popular city! 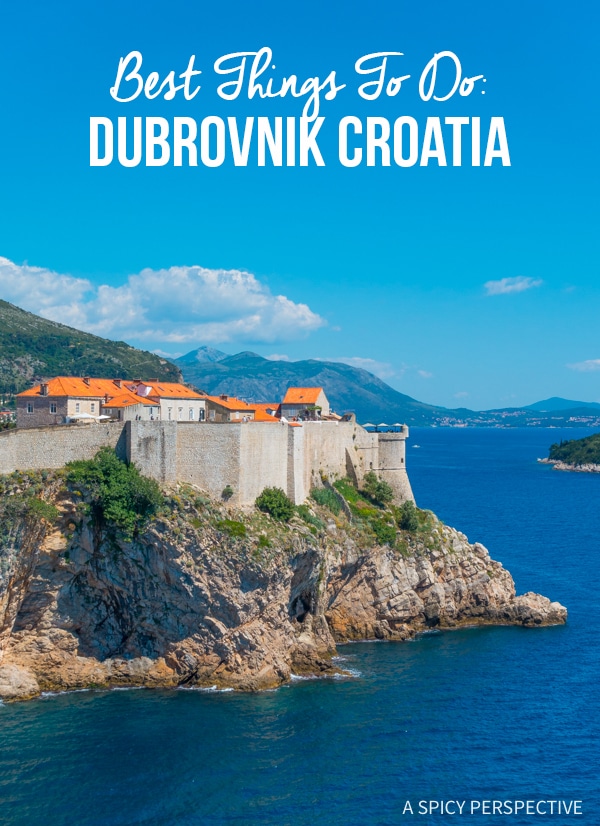 It isn’t the largest city in Croatia, but I bet it’s the town you’ve heard of.

Located on the southern tip of Croatia, right on the Adriatic Sea, this fortified waterfront community is thought to be the most beautiful of all Croatia’s cities. 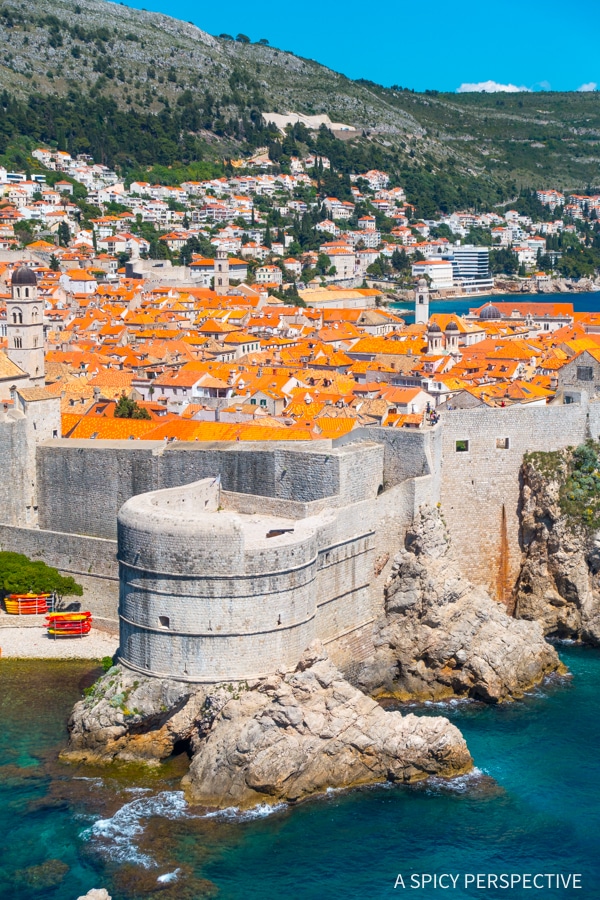 Historically, Dubrovnik grew in wealth and power due to sea trade between 1100-1300 AD. At that time is was under Venetian rule. The ostentatious architecture and mindset of the Venetians played a large part in the makings of the city.

Over the last thousand years Dubrovnik changed allegiance many times, yet was able to keep its trade route popularity moving forward to sustain the city. 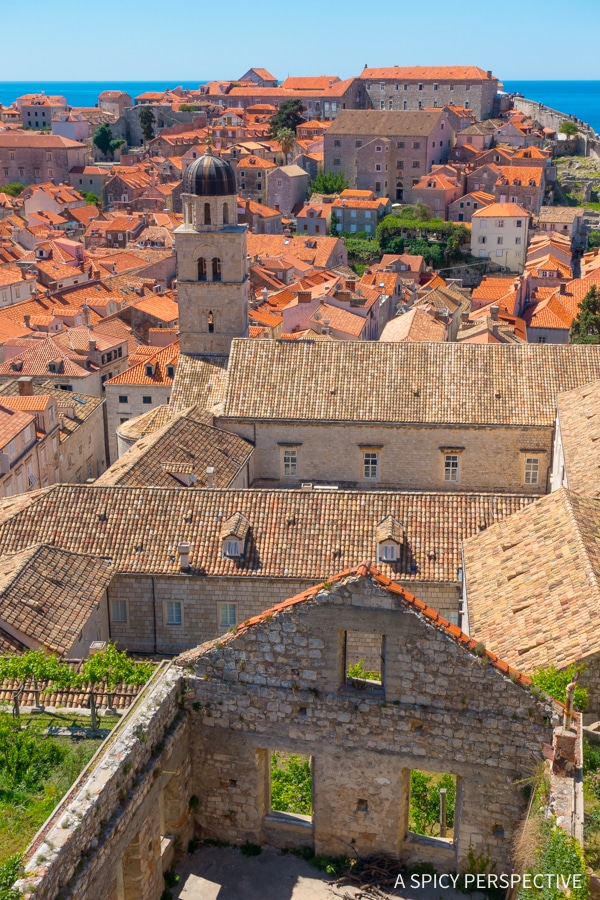 Dubrovnik is extremely well preserved for a medieval city.

It has been featured in many movies and TV shows, including the popular Game of Thrones series. Fans can book tours to the most popular filming sites. 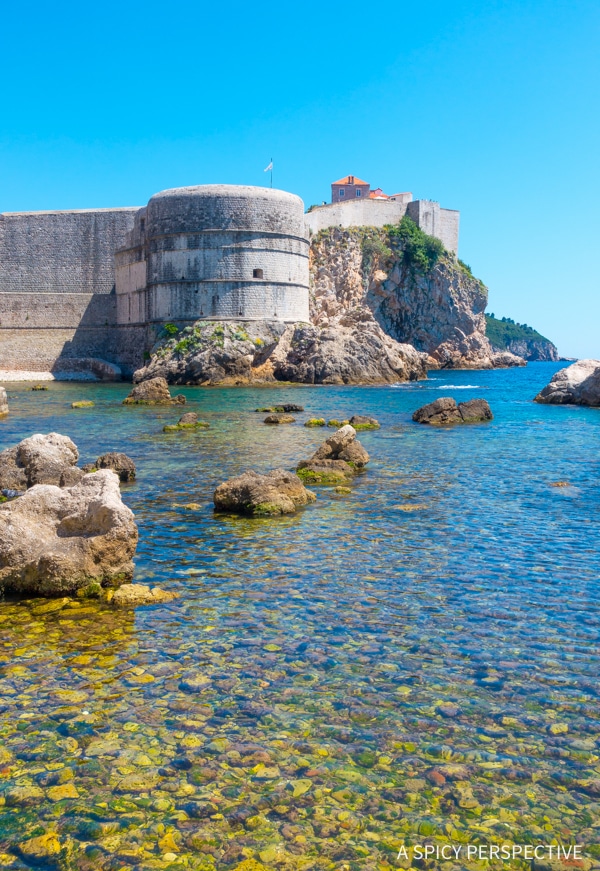 A tour guide told Amanda and I, the pristine preservation of the city is due to the fact that after Dubrovnik broke away for ruling powers, it tried to stay off the radar as a threat to opposing trade towns in the Mediterranean.

Because no one was taking notice of the increasing prosperity of Dubrovnik, very few attacks damaged the original architecture. 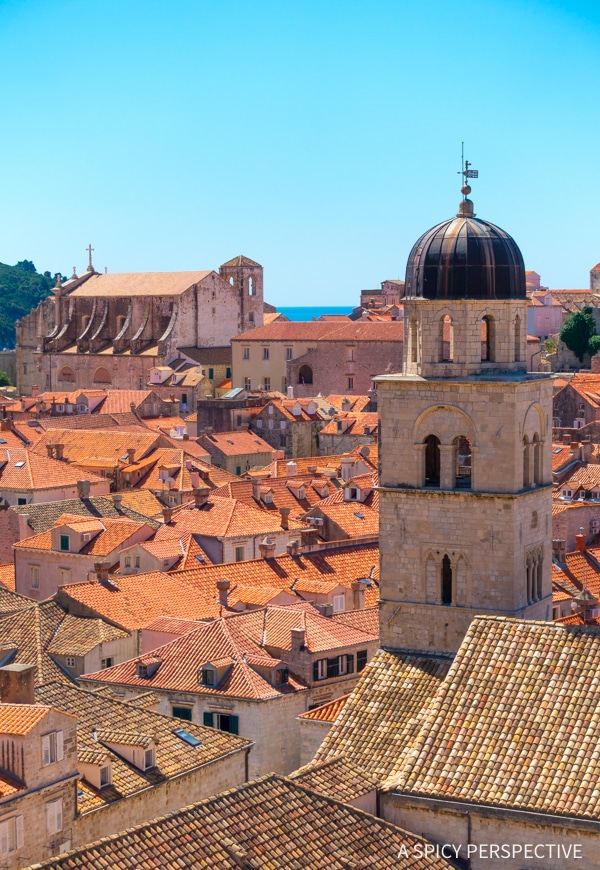 The walled Old Town is ridiculously charming, with brilliant Adriatic waters in front and mountains in the background. Scattered islands surround the city, with daily ferries for visitors. 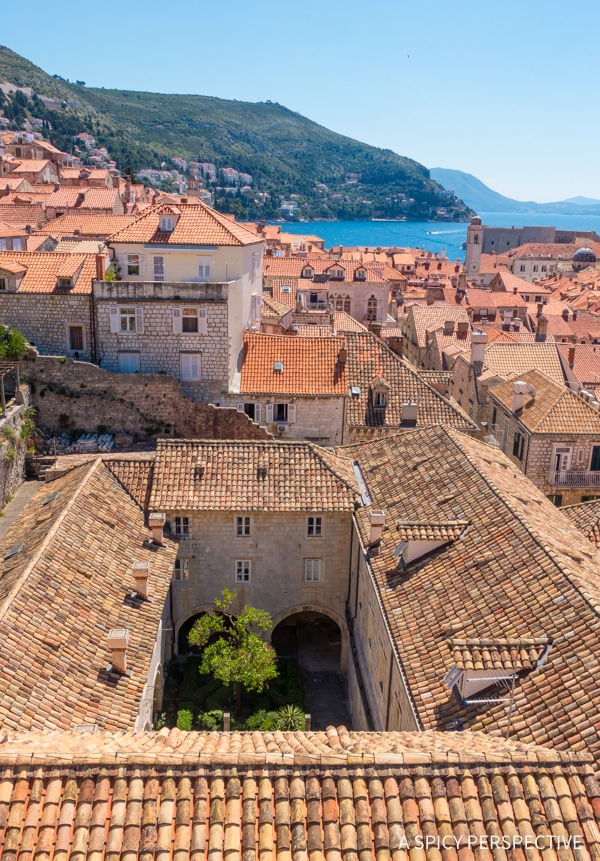 The oceanfront side of Dubrovnik offers fortresses, sun bathing on the boulders below the wall, and balcony cocktail bars for relaxed sight seeing. 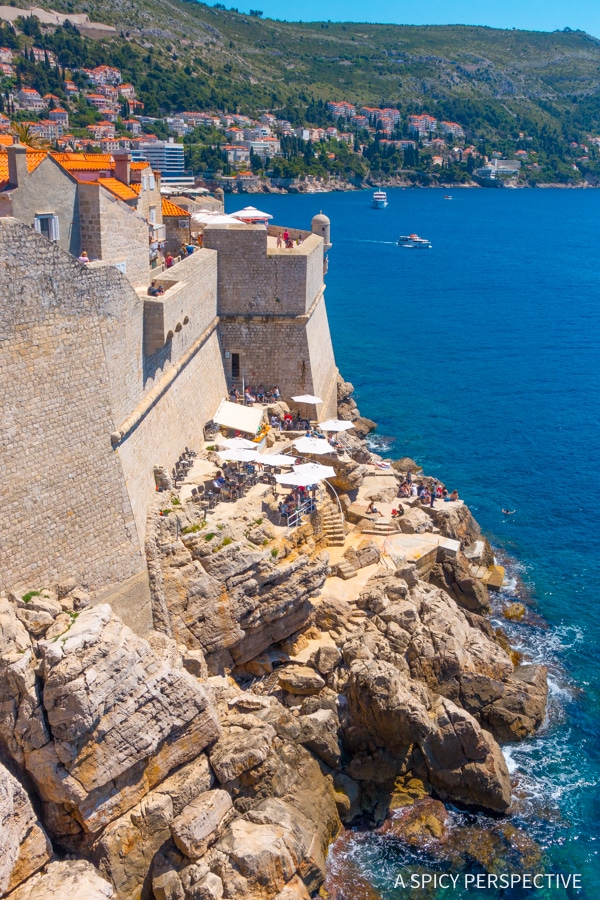 The mountain side of Dubrovnik is a series of narrow corridors that stair-step up the mountain, with shops and restaurants along each terrace. 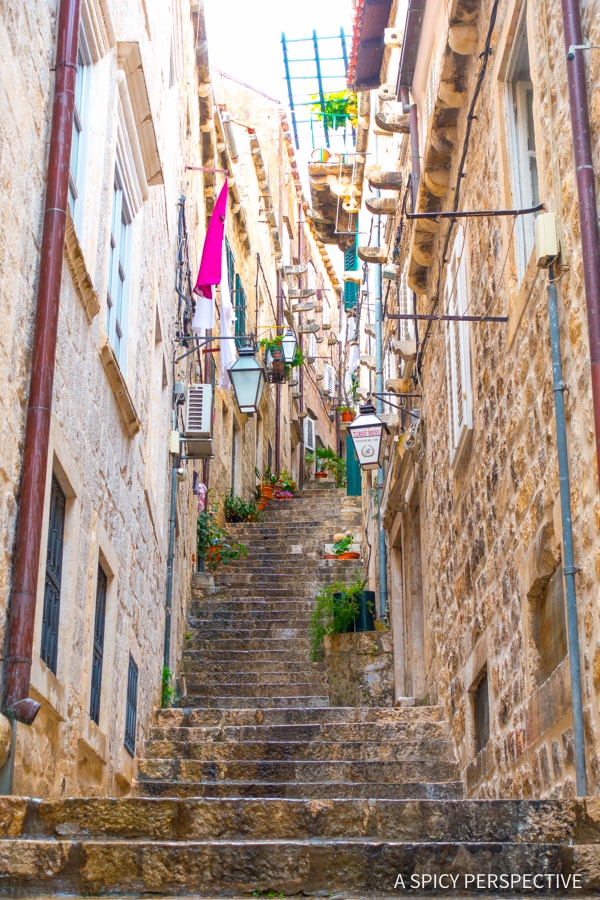 Dubrovnik is a popular Mediterranean cruise port, and does get a little busy later spring through early fall.

If you can’t stand the crowds, plan your trip November through April. Or spend just a couple days in Dubrovnik in busy season, then travel out of the city to some of Croatia’s vast natural wonders! 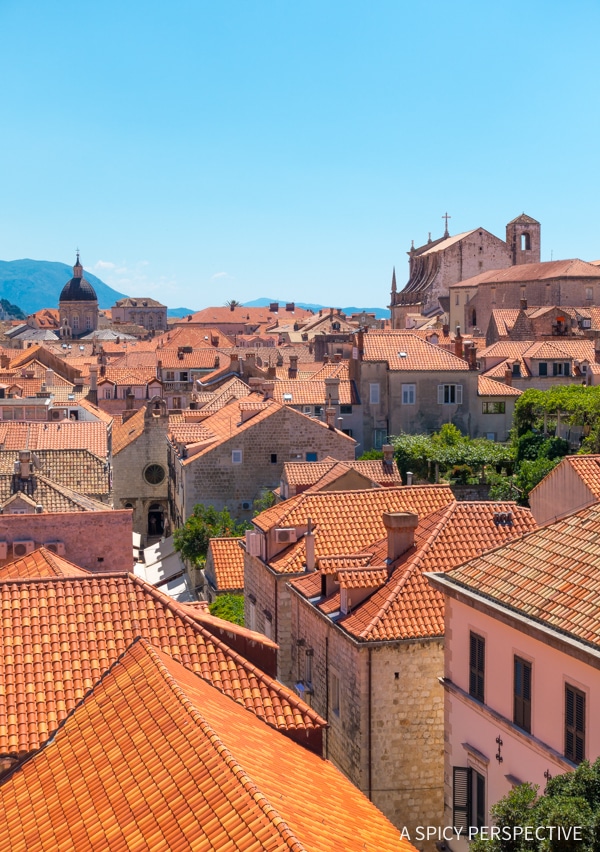 Best Things To Do In Dubrovnik, Croatia

These are the attractions I feel are priorities when visiting Dubrovnik, especially if you are only staying one to three days. 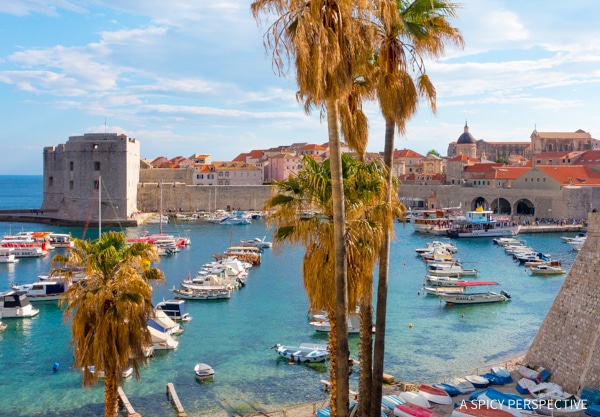 Walk the Wall. The city wall of Dubrovnik is not only a historical landmark, it’s a walkway for tourists to view the city from above! You can spend anywhere from 2-4 hours meandering down the wall. Make sure to stop and take photos, people watch, or sip a beverage.

If you get tired of walking the wall, you can take the steps down into town in several locations.

Entrance to the city wall costs around $22 per person, and is worth every penny! 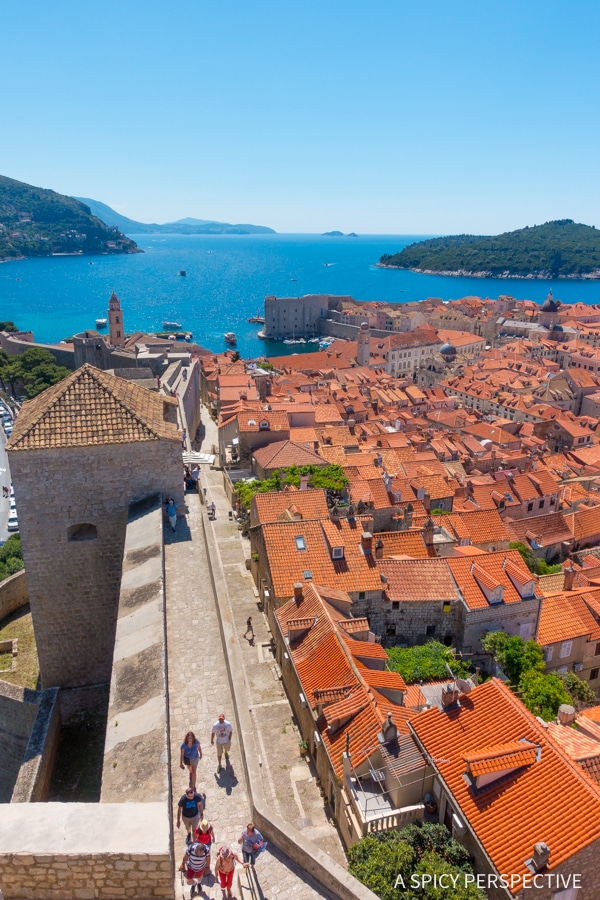 Explore Old Town Dubrovnik. Stroll the main drag, Brsalji Street, and explore the side streets. Pop in and out of shops. Rest and people watch from one of Dubrovnik’s many sidewalk cafes. 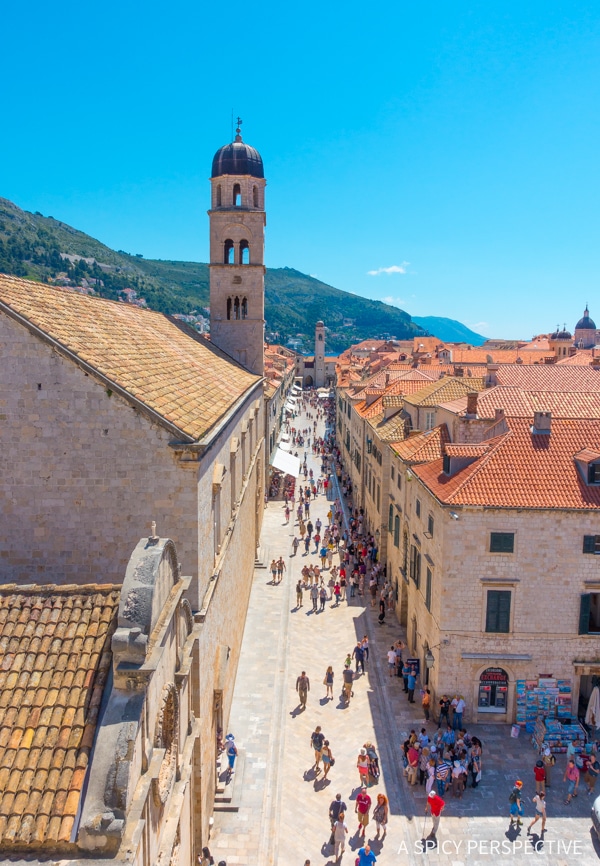 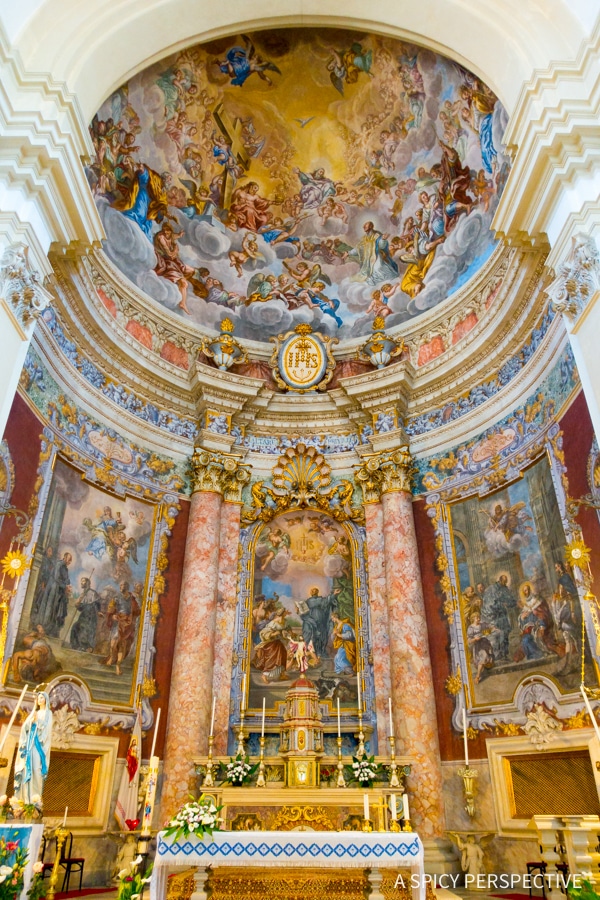 Ride the Cable Car. Right outside Ploca Gate is a cable car that will take you to the top of the mountain, directly behind Old Town Dubrovnik.

The pinnacle offers long-range views of Dubrovnik, lush green islands, and the Adriatic beyond, with dramatic mountain views on the inland side. 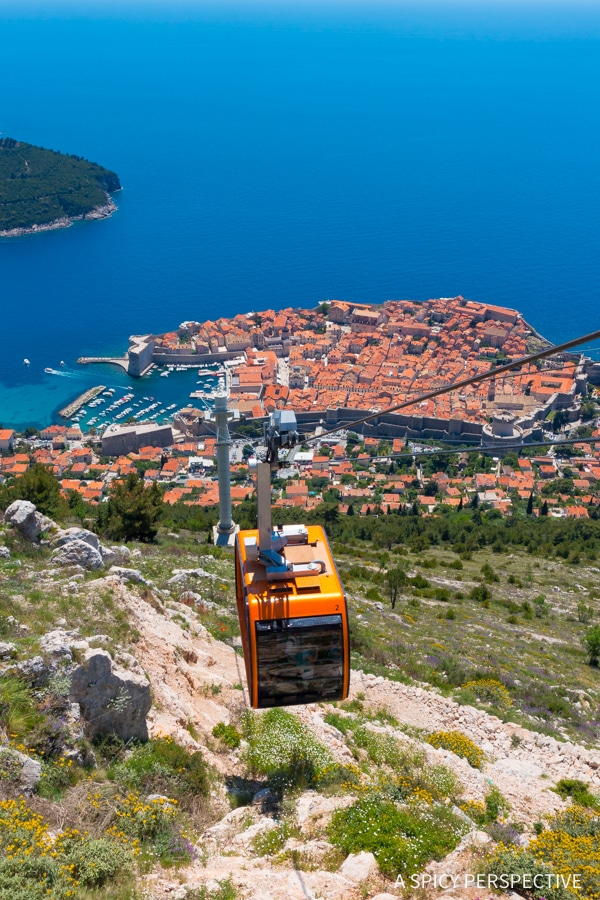 Eat lunch and relax at the top of the mountain, or hike the terrain, then take the cable car down when you are ready to move on.

Round trip rides cost around $19 per person. Again, worth every penny. 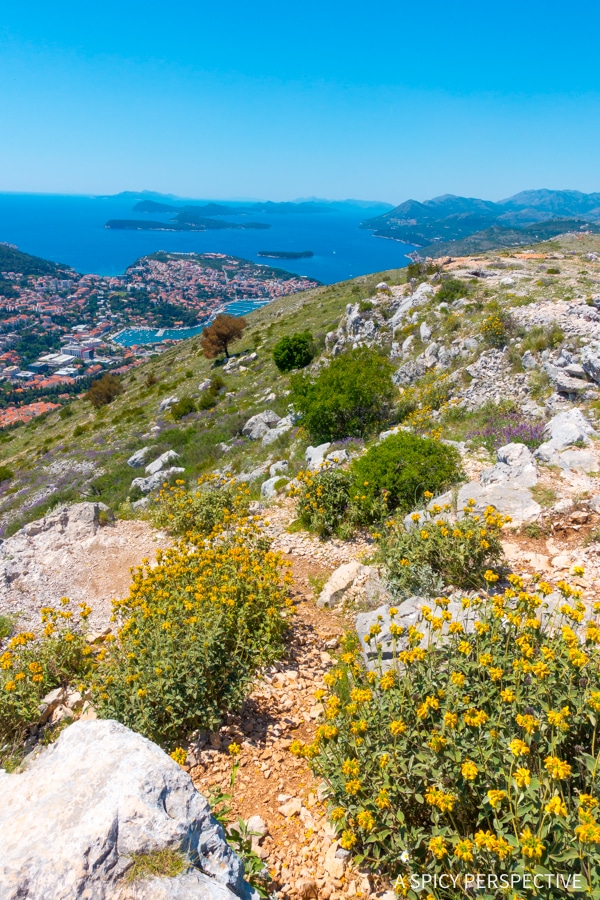 Book a Tour. Dubrovnik’s history is so rich and fascinating, it’s worth paying a tour guide to learn more about it.

You can book a group walking tour of Old Town for as low as $10 per person, or splurge on your own private tour guide for around $150 per family. 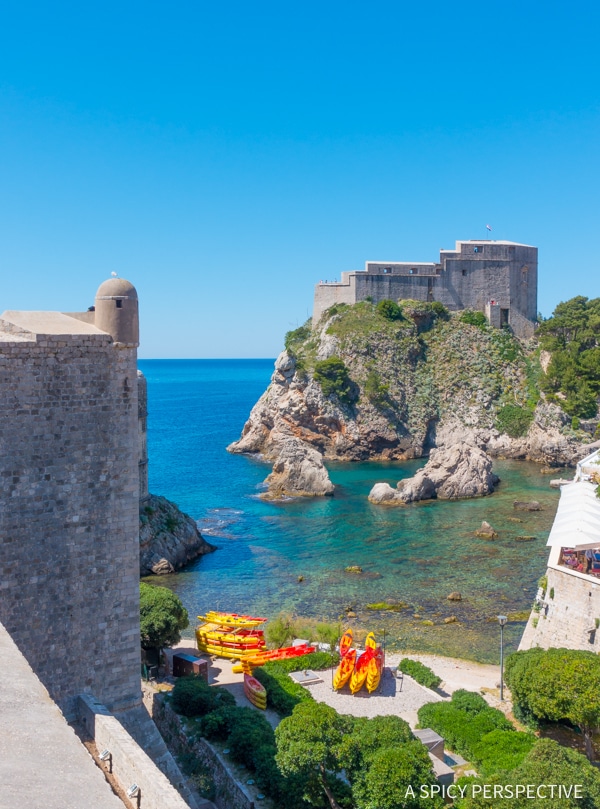 Amanda and I loved having own own private guide who took us to the points of interest we were most excited to see… And answered our long list of questions.

You can also book kayak tours, Game of Thrones tours, snorkeling trips, and excursions outside the city to nearby attractions. 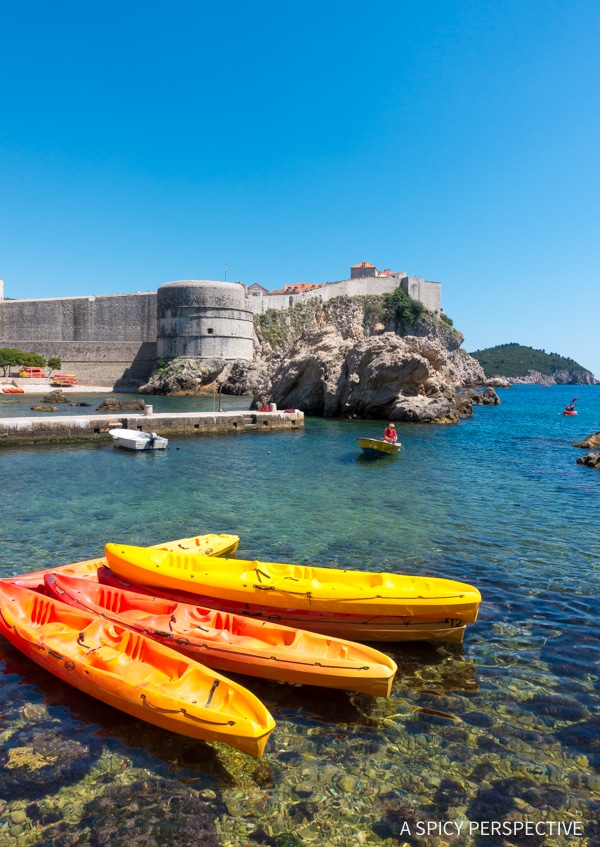 Visit a Nearby Island. You’ve not truly experienced Croatia, until you touch ground on one of its 1000+ islands!

From Dubrovnik, you can take a ferry or water taxi to several islands. Lokrum Island is the closest and easiest to access. Yet you can also visit the popular Elafiti Islands and Korcula from Dubrovnik. 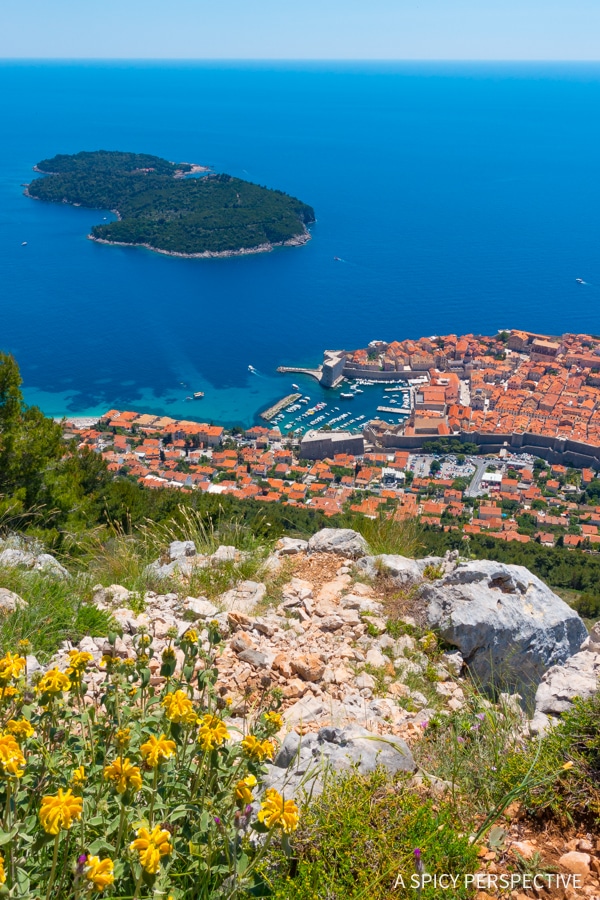 Best Things To Do In Dubrovnik Croatia – Insider Tips

How Many Days Should You Spend in Dubrovnik?

If time is short you can Walk the Wall, Explore Old Town, and Ride the Cable Car all in one day.

You will need at least two days in Dubrovnik if you plan to take a guided city tour and visit an island. Those that like to travel leisurely should plan to stay at least three nights in Dubrovnik. 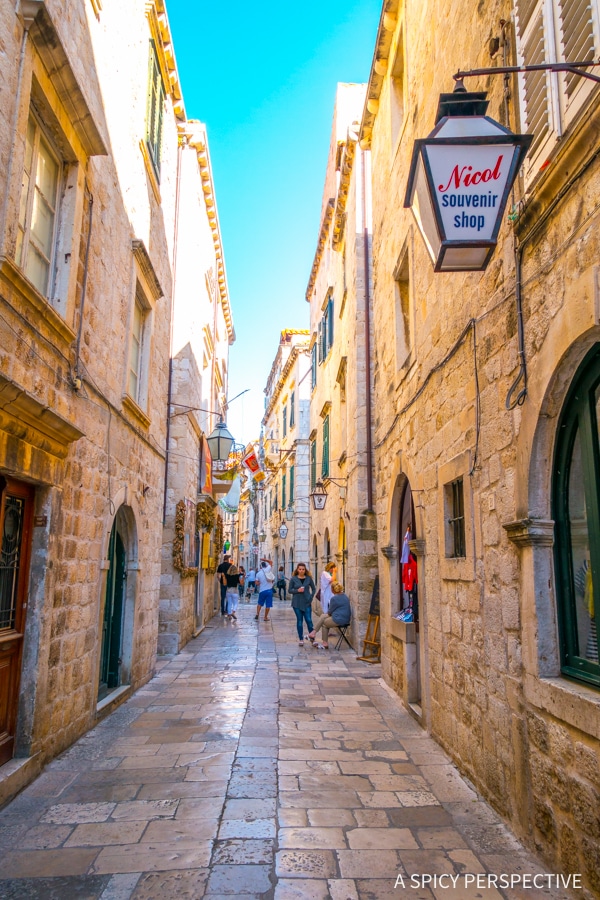 Where to Eat in Dubrovnik Croatia

With all this walking around, you are going to get hungry! Dubrovnik offers some truly amazing dining options with traditional Croatian classics, and restaurants featuring foods from Bosnia and other countries in the region.

Two of Dubrovnik’s most popular restaurants are right outside the Pile Gate with a view of the fortresses. Although they are both great, our favorite restaurants were inside the city walls. Check reviews on your TripAdvisor app before venturing into restaurants. 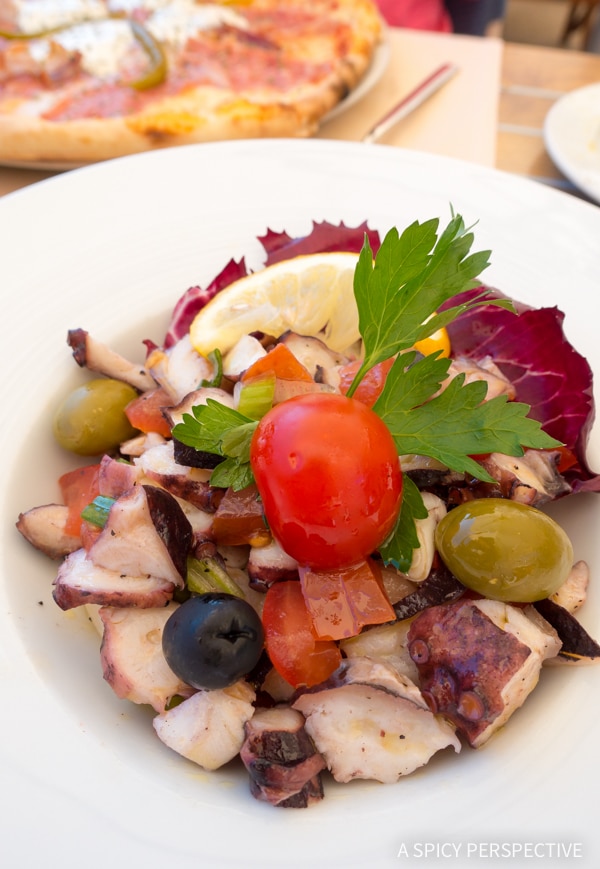 Make sure to look for and try the local specialities like…

Pasticada – A beef and gnocchi dish

Octopus Salad – Similar to ceviche, made with fresh local octopus 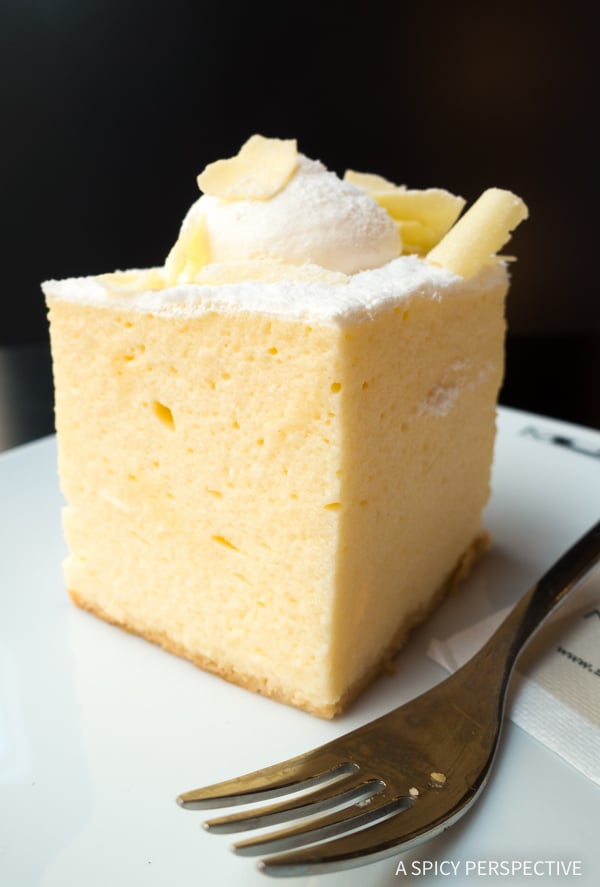 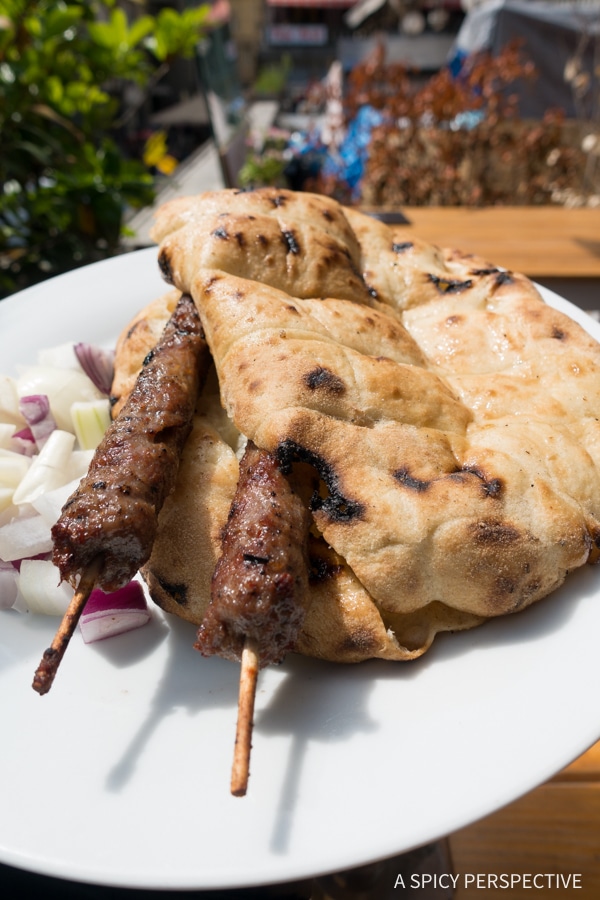 Our two favorite dining experiences in Dubrovnik were:

Taj Mahal, a Bosnian restaurant with a misleading name. 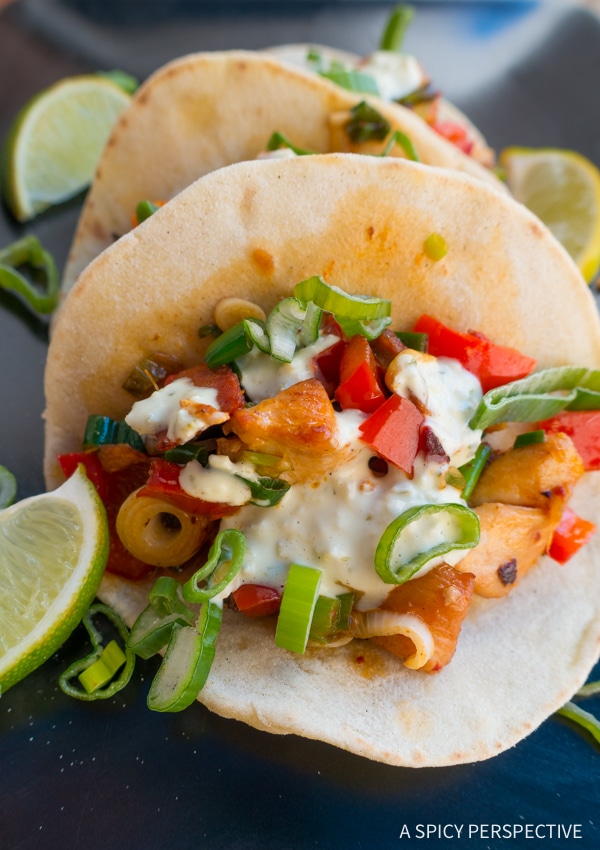 Where to Stay in Dubrovnik Croatia

We stayed at the most amazing hotel during our time in Dubrovnik, Hotel Bellevue Dubrovnik. Just a short walk from Old Town, this stunning luxury hotel offers all oceanfront rooms, a private beach, and dazzling spa, and all the comforts you’ll need to unwind after a long day of sight-seeing.

Yet, if you’d rather rent an apartment for your family, there are tons for great vacation rentals right in Old Town. 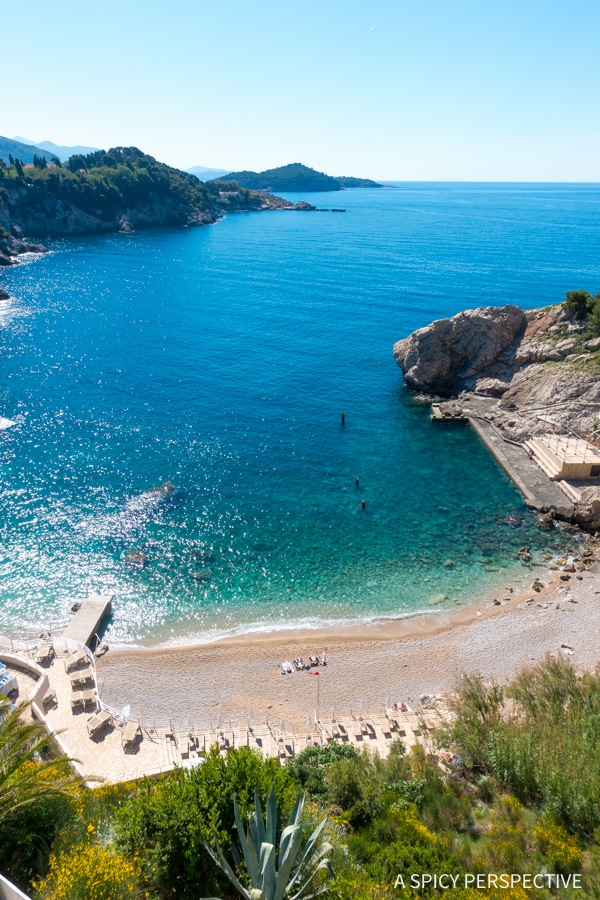 Disclosure: This post is sponsored by Croatia Tourism. All opinions are my own.

8 comments on “Best Things To Do In Dubrovnik, Croatia” 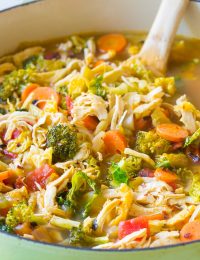 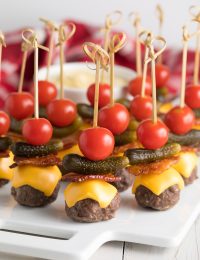 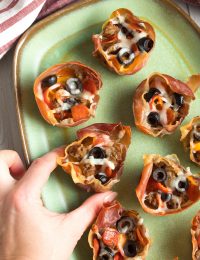 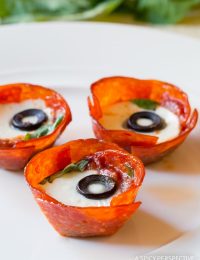