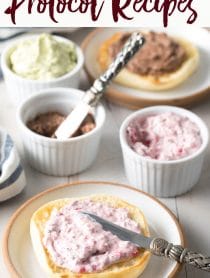 3 Budwig Diet Cheese Spread Recipes: The cancer-fighting Budwig Protocol is very effective for some cancer patients. However, it’s not very palatable for most… Until now!

Disclaimer: Before I write anything else, let me state… I am not a doctor, nutritionist, or holistic healer.

I am simply a friend helping a friend. And I thought maybe what I’ve been working on for my friend might be helpful to some of you.

Therefore, please do your own research on the Budwig Diet and Protocol and don’t just take my word for it. Thanks!

A year ago, I had never heard of the German scientist Johanna Budwig and her simple cancer-fighting blend of ingredients.

Yet in the last twelve months, three of my personal friends have tragically discovered a family member battling late-stage cancer.

In all three cases, when radiation and chemotherapy produced no change, these individuals stumbled upon the Budwig Protocol as a last resort.

Miraculously, all three people are now in remission.

I was told this exact same story, not once, but three times over the course of several months, by people I trust dearly.

It made me wonder why I’m just now learning about the Budwig Protocol.

One friend, in particular, told me the story of her father’s recovery and explained the simple blend of ingredients that destroyed his cancer.

He ate the “Budwig Protocol” multiple times a day as a natural treatment, and now in remission, eats it once a day for upkeep.

However, these ingredients have a strong pungent flavor and are not always easy to swallow. Especially when you’re sick.

Therefore my friend asked me if I could help create some Simple Budwig Protocol Recipes to make it taste better.

What Is The Budwig Protocol?

This simple recipe, called the Budwig Protocol, is to be freshly mixed and eaten immediately, several times a day if you are battling cancer. It’s also been shown to be great for cancer prevention!

The trick is, in order for the ingredients to produce a strong cancer-fighting chemical reaction when they are mixed together, there is an exact method, as well as a few stipulations.

High-quality flax oil has a strong earthy flavor that is tough on the tastebuds.

Yet, I did learn you can gently mix ingredients in, as long as they are not forcefully blended.

How Does The Budwig Diet and Protocol Work?

According to my friends, the research they sent me, and what I have found online…

Dr. Johanna Budwig, a biochemist, found that if you combine sulfur-based protein (found in cottage cheese) with omega 3-rich flax oil, the protein acts as a carrier to help the unsaturated fatty omega 3s attach to hemoglobin cells, enhancing their ability to carry oxygen.

The chemical reaction that takes place when you blend these ingredients together, also makes the flax oil water-soluble, so it can easily enter the cells.

Dr. Budwig says these two tiny occurrences allow your body to heal itself. They are essentially jumpstarting your cells so they can fight off cancer!

I should tell you, when you start your own research you will read that “There is no evidence the Budwig Protocol cures cancer.”

However, there are literally thousands of testimonies as well, from people who followed the Budwig Protocol and are now living full healthy lives.

As somewhat of a conspiracy theorist, it’s my opinion that big pharma companies would prefer we not cure ourselves (of anything) with healthy foods and exercise. Furthermore, they are usually “the money” behind big medical studies. Just saying.

What Is The Budwig Diet?

Along with the Budwig Protocol, there is a clean healthy diet to help your body help itself.

The Budwig Diet Consists Of:

According To Budwig, You Should Not Eat:

It’s similar to a Paleo diet, but a little more restrictive on sweet foods, because cancer loves sugar in any form.

As I spoke with my three friends, one stated her family member followed the strict Budwig Diet along with daily doses of the protocol.

The second friend told me her family member was so sick the just had to eat whatever they could get down. So the diet was only partially followed.

The third said her dad ate whatever he wanted, and just took the Protocol religiously.

So why am I sharing all of this with you? Two reasons…

First, I hope that if you, or someone you love, is battling cancer, you might consider looking into alternative forms of healing, along with traditional western medicine.

Doctors don’t know everything. No one does. And there isn’t one treatment that seems to work for everybody. So there’s no harm in trying different things.

Second, if you are already using the Budwig Diet, and are finding it hard to swallow, I’m here to help!

As mentioned above, I’ve been working on these Budwig Diet Recipes for one of my friends and have come up with three quick spreads that taste so much better than the Budwig Protocol on its own.

I hope you enjoy them. Here’s to your health! 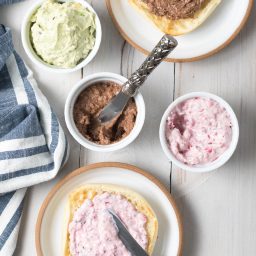 Nutritional Facts: These are calculated on the Budwig Protocol alone. Dietary Note: I photographed the Budwig spread on English muffins, because two of the three people mentioned in this post did not follow the full Budwig Diet. If you would like to follow it completely, try serving this on our Low Carb Magic Mug Bread.